Dr. Karch described the first chapter of MMM’s history, birthed out of an idea by former Mammoth Hospital doctor, Andrew Bourne. “His idea was that a bunch of us would go to far flung places around the world, places that were disadvantaged compared to us, and we would go and do as many surgeries as we could and then we would come back and feel good about ourselves.”

Then super Typhoon Haiyan hit the Philippines as Dr. Karch and a MMM team were preparing their annual mission to Chiapas, Mexico.

“We found ourselves being the first team in to the worst place on Earth and really doing something that was novel, that had not been done before,” he said. “We took the forward surgical team model from the military and applied it to international casualty situation.”

MMM learned several lessons from their trip to the Philippines, Dr. Karch said. Namely, that mass casualty does not discriminate and can happen to anyone; that international agencies bogged down by bureaucracy can’t respond within the first 100 hours, “and so most of the people die,” he said; and that the military model really works.“Putting a forward team right up front, right where the people are getting injured—a team that is lightning fast and trained for mass casualty—immediately decreases mortality,” Karch added. 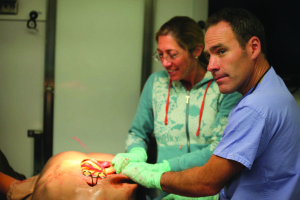 The new chapter of MMM started with the Mass Casualty Seminar this week: an expanded three-day course accredited by the University of Nevada.

“[Mass casualty treatment] will be the new thing for medical education anywhere and everywhere in the world,” Karch said.

Dr. Karch started the Mass Casualty Seminar three years ago as an informal day of training, mainly for Mammoth locals. “[This year] we figured that now we have disaster experience, let’s bring in more than just Mike,” said David Page, co-founder and Chief Operating Officer of MMM. “Our first step was to get accredited, so we can give continuing education to everyone from doctors to paramedics.”

But the seminar is not just for medical personnel. “There are other mass casualty courses, but they tend to be focused on just surgeons or just paramedics. Our goal is to train the whole team,” Page said. “We have this model that is essentially a surgical strike team.”

Along with medical staff, Page envisions sending out teams with four non-medical members who set up communications, build the structures and manage the operations.

“This is our effort to gear up for more of a national presence for next year’s seminar,” said Dr. Sara May, MMM Medical Director and Board Member. “Next year hopefully we’ll bring people in from all over the world.” This seminar drew participants from Washington, Utah, Colorado and Arizona.

Dr. May got involved with MMM when she went to the Philippines with them last year. “I went to med school to do international medical relief. But honestly I just got side-tracked right out of medical school and got a job to start paying off student loans.”

Dr. May was one of the faculty lecturers during the seminar, along with Dr. Karch, Page and Captain Joseph McQuade of the US Navy. According to Karch, McQuade is “a hair’s breadth away from Admiral at this point.”

McQuade was a nuclear engineer in the Navy for seven years before going to medical school at Georgetown University with Dr. Karch, where they were on the running team together. After medical school, McQuade returned to the Navy, where he was the Senior Medical Officer at Guantanamo Bay before spending a year as a senior triage doctor in Fallujah, Iraq.

“We saw 2,200 casualties and 600 surgical urgencies in six months,” he said. “For nine months we did trauma care in bunkers.”

A quarter of McQuade’s patients were civilian children and another quarter insurgents, along with U.S. servicemen. Because their makeshift hospital was set up so close to bomb explosions and other mass casualty events, McQuade and his team only lost four patients in the year they were in Fallujah. “We had that golden hour, and that’s the key piece that [Dr. Karch] understands. If you can get to patients within that first hour of the casualty, you can really keep them alive.”

McQuade shared his experiences with triage work in Iraq during Wednesday’s lectures, as well as teaching a segment on the management of a dirty bomb. McQuade is currently the Public Health Emergency Officer stationed in Jacksonville, Fla., which covers an area where nuclear weapons are stored.

Locals Ryan Boyer of Boyer Construction and Architect Robert Creasy also gave lectures: “We are going to teach you how to build a hospital from scratch,” Dr. Karch told the seminar participants. “And we’ll teach you how to do that in 45 minutes.”

Other elements of the seminar included operating generators and satellite phones, as well as using car batteries to charge cell phones. “There are expectation in the mass casualty that you should be able to complete a very complicated operation in the most dire of circumstances,” Dr. Karch said. “with no roof, rain over your head and no lights. We’re going to teach you how to do that.”

DePuy Synthes, who provided the cadaver lab for Thursday’s demonstrations, sponsored the seminar. World Point provided Cut Suit Technology that is “really the future of medical training,” Dr. Karch said. The simulation technology provided by the cut suits allowed participants to practice surgical and mass casualty scenarios with real world scenarios such as blood hemorrhaging. The technology was developed for military training and just starting to be used in civilian medical training.

“This has not been done for civilians in the past. What they have learned in Afghanistan and Iraq, now we are all going to benefit from it,” said Mammoth Hospital CEO Gary Myers. 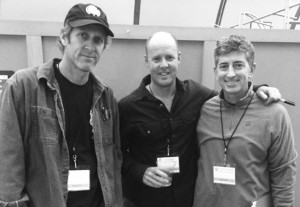 Myers, who is a volunteer with MMM, gave Hospital employees time off to attend the seminar and participated as much as possible himself. “We’re out here on our own [in Mammoth], and if something really bad happens, even if it happens in L.A., we’re going to get flooded with people,” Myers said. “We have to be knowledgeable. This is just really taking it to the next level.”

The Mass Casualty Seminar was dedicated to the men and women who lost their lives on September 11, 2001. Dr. Karch was in his seventh year of residency in Washington D.C. and traveled to ground zero hours after the planes struck the Twin Towers.

“I thought I was at the top of my game, but I wasn’t,” he said. “I realized that I didn’t know anything and nobody knew anything because we had never done this before … All the information that I read and studied for the next decade came from Afghanistan and Iraq because there were no other studies in mass casualty.

“The response now is very upfront and personal. You put doctors and nurses and techs right in the battlefield, and that’s how you save lives.” This model is really “a paradigm shift” from the previous model that accepted a high death rate in the first 100 hours after a disaster, Dr. Karch said.

“If you look at the death rates that have occurred in Iraq and Afghanistan, they are dramatically lower. And if you take a look at the model and apply it to international mass casualties, I think we really proved in the Philippines that we can make a big difference,” he continued.

MMM recently hired Scott McGuire as Director and are looking at changing the structure of the organization, as Dr. Karch recently resigned as CEO due to his family’s move to Virginia.

In addition to the expanded Mass Casualty Seminar, MMM is gearing up to expand operations outside of Mammoth. Originally, “We are all leaning more towards making it more like ‘Mountain Medical Missions,’ so that we include people who have the lifestyle and the culture we do,” Page said. The mountain component is key to MMM’s vision because “there’s a high level of self-reliance in a town like this. People have in their garages equipment that they would need to go somewhere for 10 days. And you don’t find that in LA,” Page continued.

MMM partners with Direct Relief, one of the largest medical supply non-profits out there. Page said the organization asked MMM to build up a database of volunteers after they saw the success of the Philippines mission. “The dream is that in 5-10 years we’ve got people spread out all over the globe who are credentialed,” Page said.

MMM is building a “niche in disaster response” with the database, he added, which will enable them to send small teams into disasters within the first 100 hours. “We can get a foothold until the bigger organizations like Doctor’s Without Borders come in 10 days to two weeks,” he said.

“This is our newest chapter.  We’re hoping you will help us write it,” Karch concluded. “In the end, we’re hoping it’s a story that we can all be proud of.”