Born in Oakland, California, and raised in the greater Bay Area, he started “taking pictures” in his Cub Scout days. He attended CSU San Luis Obispo to study journalism, pursued a career in broadcasting and management. Rick says he didn’t start “making photographs” until 1989. Since that time, every spare moment was spent in the pursuit of the photograph as fine art. His work has been shown in numerous solo and group exhibitions, published in books, magazines and calendars. 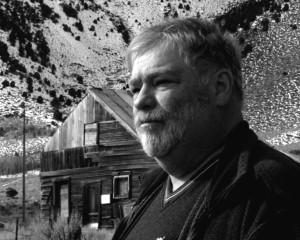 Rick  moved to the Eastern Sierra in 1992, spending four years as sales manager for the Mono Lake Committee. Through last spring, he provided semi-annual photography workshops for the Committee. He also owned The Great Outdoors, a nature-oriented gift, book and music shop in Mammoth Mall. In 1999, Rick relocated to the coast to accept a position as director at the Weston Gallery in Carmel, a top fine art photography gallery, and in 2001, he joined the staff of the Foothill College Photography Department in Los Altos Hills. A former student testifies, “As a truly great teacher, Rick will often ‘fade into the background’ on a workshop and you’ll suddenly realize that you are making your best ever images.” Rick touched the lives of thousands of students both in workshops and in college. He was an inspiration to all who knew him.

Now, a few words from local folks who loved him.

Jim Stimson: It was over 20 years ago when I first met Rick. He was working at the Mono Lake Committee. We both shared a love of large photography. One February late afternoon he, his son Douglas and I met in Lee Vining to drive around to the backside of Mono Lake and look for new images. Rick drove up in his battered SUV, the sides scraped to the metal from off road brushes with local flora and bumper caved from a recent deer collision.  As we piled into his car, I thought to myself, “What could possibly go wrong?”

We were making great time with Rick whipping around tight corners, his young son Douglas bouncing in the back seat. We quickly came upon a fork in the road and before I was able to say, “I think you’re gonna wanna stay right…” We plummeted down a steep road, then as the road bottomed out, the car oozed to a stop. You could hear a pin drop as the car sank to the floorboards in the slimy, primordial mud. Even with 4WD, jacks, and ample brush to place under the tires, we were stuck. It was pre-cell phone era so we settled in for the night. Rick ran the engine and the heater for warmth. Late that night, we awoke to headlights shining into the car. Larry Ford from the USFS had been summoned to rescue us because we were overdue. We were yanked free and extricated from the muck, free for future adventures.

Rick and I continued on further adventures, taking those roads less traveled, capturing light, teaching workshops together, and sharing laughter. He was a big guy with a warm heart, huge smile, and a zest for life. Rick loved his family and friends. He will be sorely missed. I’m going to miss the guy. It was an honor spending time with him. Rick was too young to die and dang it! I never got to say goodbye.

Nancy Mahannah: I first met Rick and his family in 1960 (I was in third grade, he in 4th) when our families were members of the United Methodist Church in Hayward, California. Because each of our families had 4 kids about the same age, we all became life-long friends. Rick and I golfed and caddied for our Dads in middle school. He was my first sweetheart; the first one who held my hand at church camp at Tahoe. He took me to my Senior prom and to Grad Night at Disneyland.  I spent one New Years Eve at the radio station where he was a broadcaster; he had a wonderful voice and later recorded a few commercials for the Health Dept. Up until his father’s passing, our parents got together annually in Morro Bay. Friendships that old and true don’t come along every day. Rick was a kind, loving person who loved his family, loved his art and loved the Eastern Sierra.  All who knew him will sincerely miss this loving, caring being in the world.