When news of the Round Fire reached Sunny Slopes resident Amy King, “I thought, what can I do to raise money to help?”

King grew up in Mammoth; her parents own Rock Creek Lake Resort, which she and her boyfriend manage, with plans to one day take over. Going to school in Mammoth, she said, “I met teachers whose homes were lost: Jeanne Oakeshott and Eric Ellis, and the O’Dells [another family that lost its home to the Round Fire], I went to school with their kids.

It hits close to my heart, because these are people who’ve been a huge part of my life,” she said. 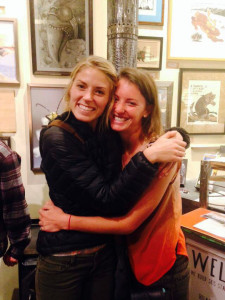 King came up with the idea of starting a “gofundme” campaign, something she’d seen a friend use successfully to raise money for another friend with colon cancer.

“I had seen that the Bishop Chamber of Commerce was accepting donations,” she said. So on Saturday, Feb. 7, she set up a Round Fire Relief gofundme page.

King credited friends and family members on Facebook for helping distribute information about the gofundme campaign. Facebook and word of mouth eventually inspired about 531 individuals to donate.

While she may have had mixed feelings about social media prior—“It’s great, but at the same time, we have no privacy anymore,” she said—the rapid response via Facebook showed King one of its benefits.

“The way you can spread the word now is amazing,” she said.

Money raised through the gofundme campaign goes to the Bishop Chamber of Commerce, which has set up a relief fund account with Alta One bank. The next step is to create a committee to manage the funds.

“We’re asking around in Swall and Paradise communities, so we can talk about the best way to distribute the money,” King said. “None of that money can be taken out until we get the committee set up.”

As for the amount donated so far, King said simply, “The community is amazing. We’re really lucky to live here.”

The campaign is available here: http://www.gofundme.com/roundfirerelief