In my life, fishing season truly begins when I make that annual transition out of the high school classroom and into the boat on Crowley Lake. As I wrap up academic conversations per enlightening sophomores on such events as the Cold War, I begin to engage in discussions about the quality of the mud from which the midges hatch on the lake.

However, my most interesting guide trip of the season so far came in that in-between season where school hadn’t quite let out and I was guiding on the weekends.

I received a message from a Bridgeport resident who goes by the handle “Jungle Jayne” on Facebook. She told me that she wanted me to teach her husband Paul how to fly fish. According to Jayne, Paul expressed interest in wanting to learn to fly fish, but he was willing to postpone it to the end of this summer. Jayne and I agreed that it shouldn’t wait.

We had a few lengthy phone conversations about Paul’s unique set of circumstances. Coming from a bait and spin fishing background, she informed me that he had some health issues that she wanted to bring to my attention. In short, Paul is fighting a battle with bladder cancer. I’m fairly opened-minded about dealing with people’s abilities, as I learned from Kathy Copeland and Maggie Palchak of Disabled Sports Eastern Sierra that it’s best to focus on what someone can do rather than their limitations. I figured I’d easily enough find a way to make time on water with Paul work, whatever that might mean. 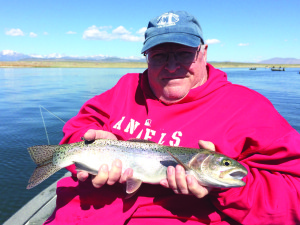 Paul and Jayne found me at the gates of Crowley Lake on a crisp May morning. After our formal in-person introductions, including knocking out the bureaucracy of filling out guide report forms for the California Department of Fish and Wildlife, Jayne dropped down to Bishop, entrusting in me her husband of several years. Paul and I made our way to the boat, and out onto the blue waters.

With all first-time fly fishing lake trips, I did the casting for Paul. This is no different than any other beginner’s trip. I handed Paul the rod after I dropped the goods into the honey hole off of Sandy Point. Paul was responsible for setting the hook every time that indicator moved on him. And set it he did. The gentleman also landed a few healthy trout, and subsequently had the time of his life. He was thankful his loving wife pushed him along to cross paths with me that beautiful morning.

The following Monday, not two days later, Jayne dropped me another message. Her directions: I’m booking you again for this next Saturday. You are taking Paul and our daughter Shannon out for a full day trip of lake and river.

The thoughts in my mind? “Well, that didn’t take long.” It’s very gratifying to earn a repeat client. This request however was a new personal best per back-to-back bookings of a new client. Exactly one week off.

Fast forward to another crisp Saturday morning. Déjà vu repeat session of knocking out the State of California required paperwork. Paul produced for me, again, photo-worthy trout on the fly. Shannon hooked up some fish, including an impressive pound-and-a-half Sacramento Perch which they later enjoyed for dinner. An exception to the religious catch-and-release technique that I practice with trout.

After the lake, we dropped down to Bishop. Quality sandwiches and watermelon for lunch, while chatting moving water techniques and tactics at the campground at Pleasant Valley Reservoir. A couple hours of casting flies at trout. They landed a few beautiful wild trout, including the one I unintentionally hooked for them on the casting demonstration. At some point that afternoon, Paul had to empty his artificial bladder sac, and he asked me if I wanted to see it. “Sure,” I said. It just gave me an appreciation for the trooper that Paul is. Sometimes, on fly fishing trips, we learn about trout. Other times, we learn about unrelated life events.

I went home that afternoon, and I felt good. I also thought a bit about my own father. I lost my dad the summer of 2007. He went from healthy to dead in a matter of 36 short, dizzying hours, having contracted one of the most aggressive strains of meningococcemia that doctors have ever seen. The last time I saw him, he was up in Mammoth with my mom. The two of them were visiting me on Memorial Day Weekend. I spent the entire weekend casting flies with him. He was very new to fly fishing, and, he loved it. I gave him a hug that Memorial Day 2007, expecting to see him a few weeks later, when we’d be casting flies again. I never saw him again. My dad died when I was 32 years old. One of the hardest lessons that he ever taught me was his last: To live every day like it’s your last, because it just might be.

I agree with Winnie the Pooh, who famously stated, “Today is my favorite day.”  Twice, I got to spend “today” with Paul. I like Paul. I like his family. I like his family’s passion of all things fishy. I’m glad that I could introduce Paul and Shannon to fly fishing. Since then, I’ve taken two married couples out on the water on two different weekends. Spend time with your family. And if you’re thinking about learning to fly fish, the truth is, today is the most perfect day to do it. It’s the best day of the week.

A more detailed report can be found at http://kittredgesports.com/fishing_report.php. Chris Leonard guides for Kittredge Sports. Call 760.934.7566.