Getting found, giving back.

Usually, the most memorable thing about going fishing is feeling a feisty fish tugging on the other end of the line.

But even on those rare days when the trout aren’t biting, or you just can’t seem to land any, and all that’s left for the slightly frustrated angler is the water and the wind, the mountains and the birds, the bugs and maybe some beers, there’s no better place to “waste” a day casting away than in California’s Eastern Sierra. Sometimes the real magic doesn’t have much to do with fish at all.

“The Sierra should be called not the Nevada, or Snowy Range, but the Range of Light,” John Muir wrote in The Mountains of California, “the most divinely beautiful of all the mountain-chains I have ever seen.”

The “Eastside” of the High Sierra is absolutely stunning, awe-inspiring and is able to grab onto some of us—people like John Muir, Ansel Adams, Dave McCoy, you, me—with a sort of bear hug on our souls that it never lets go. It’s a hold that can be especially strong for those of us who love to fish for trout. 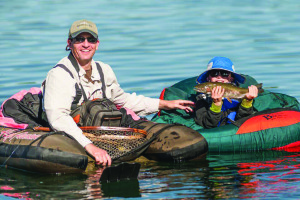 That’s why the new guidebook Casting Around the Eastern Sierra is being written. It is being created to honor and to say thanks to a truly special region and the people who know and love it best.

Like lots of folks, I began fishing as a kid and cast many days away throughout my life. But I became a fisherman in the Eastern Sierra.

Early in my tenure at The Sheet when I was moonlighting as the Bar Manager at Whiskey Creek (RIP), Jack Lunch called me up one spring day and asked me to head out to Crowley Lake at the ungodly hour of daybreak to go fishing with a guy named Old DB. That story turned out pretty well, especially since DB (aka Doug Butler) sent me home with a load of trout—most journalists love free food.

Soon thereafter, a talented local fly fishing guide named Doug Rodricks called up. He’d read the piece on DB and asked if I’d be interested in doing a story on fishing with him. Doug added that since it seems like I like to do weird or different things, we’d go off the beaten path and drift boat the Lower Owens. It certainly was different, but pretty darn fun and before I knew it, well, it seemed like every fishing guide—or potential guide, former guide or longtime local angler sitting at the bar—was offering to take me out fishing. So I obliged as many times as possible. I can only drink so much.

Lots of those stories were lucky enough to find their way to the pages of numerous publications and win enough writing awards to fill up a good-sized tackle box. More than a decade later, I feel pretty blessed that fishing writing, and the Eastern Sierra, found me.

So it seemed like it was high time I gave back. And one thing that always drove me crazy was that there wasn’t a book that could tell me about where to find fish in the region and about the historic tackle shops, lodges and people who make the fisheries so unique.

That’s why Casting Around the Eastern Sierra won’t be just a guidebook – rather, it’ll be a rather long-winded thank you note and love letter to one of the best and most underrated places to fish on this watery Earth. Thanks for reading, and for years of inspiration and support!

“Only those will ever know who give the freest and most buoyant portion of their lives to climbing and seeing for themselves.” –John Muir

The original “Sheet-head,” McKenna has been writing award-winning content for The Sheet since he was its first staff writer hired back in 2003. Mike is currently working on his second book (see ad below). His first book, Angling Around Sun Valley, was named Book of the Year by the Northwest Outdoor Writers Assn.