When you run a paper, and you screw up, you hear about it.

This week, John Mueller, owner of John’s Pizza and the Outlaw Saloon, called up to say, “Hey, how come we didn’t get some press in your summer guide story about signature cocktails? We have signature cocktails. And they’re damn good.”

Being the intrepid reporter I am, I went down to the Outlaw this past Tuesday to investigate.

When I got there, Mike Butcher was sitting at the bar. He says he often stops by the Outlaw on Tuesdays for the taco bar ($2 a taco). So I enlisted him as a co-taste tester.

The estimable Tatiana Suseoff was our bartender. Jackie Eaton was our server. 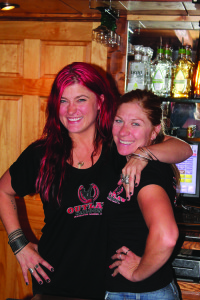 We sampled four cocktails. The best one was a Cucumber Pistol, which tasted like a mojito with a cucumber twist.

The Strawberry Limeade, said Jackie, is the most popular signature cocktail they serve. “It’s what the girls ask for, ‘cause you can’t taste the alcohol,” says  Jackie.

Butcher described the 1800 reasons cocktail made with coconut-infused tequila as tasting like Coppertone. I don’t know what to make of that. It was super sweet.

The Gold Rush was more of a guy’s drink. Makers Mark and Domaine de Canton.

The tacos were fresh and awesome.

When I asked Jackie what the signature cocktail list looked like in winter time, she smiled. ““In winter, we just do straight shots,” she said.

She then touted the beer and a shot special for those who like their signatures pure.

She was also quick to point out that the Outlaw has the coldest beer in town.

The most popular night at the Outlaw is Monday, said Jackie, because happy hour runs from 4 p.m, to close.

She also touted the Wild Wing Wednesday, where the wings are 50% off.