I’ve got good friends who live in Oakland, Calif., Jean and Otis Segers. I met them long ago at the now-defunct San Francisco Blues Festival. Until now, I’ve never been able to get them to come to Bluesapalooza.

In part it’s the drive. The last time Otis came to Mammoth was for my wedding. He drove over with his wife’s sister, Patty, and on the way home they took a wrong turn off the 89 and ended up in Stockton.

A memorable wrong turn, and not because Stockton qualifies as a scenic detour.

But dutifully each year, I try to sell him on Bluesapalooza. I read him the lineup over the phone. Always great lineups. But apparently not worth risking Stockton.

This year, however, Otis and Jean are coming to Mammoth. The decision was made right after I told them about Ruthie Foster.

Ruthie Foster, a native Texan who grew up in a small town along the Brazos River, has all the professional accolades you might expect. Multiple Grammy nominations. Winner of the Blues Music Koko Taylor (Traditional Blues Female) award in 2011-2013 and 2015.

So where did it all begin?

A profile in the Charleston (WVa) Gazette mentioned that Foster grew up listening to Kenny Rogers.

“Country stations [in small town Texas] had the strongest signal,” she said. “Country was very popular. And as I saw it, they [country artists] were great songwriters.” 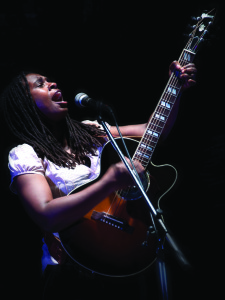 Foster also mentioned she was into Stevie Wonder as a kid. As for blues influences, her father loved Lightning Hopkins and Howlin’ Wolf. Her parents also went to the Ike and Tina Turner shows when they passed through.

She grew up singing in church, then studied music at a local community college (McLennan). And then?

She joined the Navy.

To get away from music.

She ended up working on helicopters and hanging out with her mechanic buddies.

One night, the Executive Officer of her command unit was having a Christmas party (she was stationed at the Naval Air Station in Coronado) and the band started playing Jimi Hendrix’s “Red House.”

Ruthie got up and sang with the band. After which, it was strongly suggested by her commanding officer that she join the Navy band.

When she left the Navy, she was signed by Atlantic Records and moved to New York City. But moved back to Texas when her mother became ill.

“I would ask if she wanted me to come home,” said Foster. “She’d say no … but her voice would betray her.”

So Foster exited the contract and a marriage to come home.

Which brings us to Mavis Staples, whom Ruthie describes as a major influence on her career. And Mavis describes Foster as “a little sister.”

They met more than ten years ago at the Edmonton Folk Festival. Foster’s “guide” for the weekend facilitated a backstage introduction. “I got half my name out before she [Staples] opened her arms and gave me a hug and said she knew all about me and my journey.”

Staples told Foster that she admired her because she had her priorities straight.

“Promise of a Brand New Day”

Sheet: What was your process in choosing Meshell as your producer? Did it take you where you thought you’d go?

Foster: We were connected through Valerie June (a fellow singer-songwriter who had worked with Ndegeocello). It took a few years to get our calendars together. I loved her edginess and her old soul sound.

The edginess was manifested when Ndegeocello suggested Foster do a cover of “Outlaw,” an old song by Eugene McDaniels. In the original, he uses the ‘n’ word. Foster wasn’t comfortable with that. “I didn’t want to do that. I wanted to be edgy, but not that edgy.” So she reworked the lyric and did the song, which was sort of an anthem of women’s liberation for its time (1970).

“It’s a fun song to do, especially live,” says Foster, who adds with a chuckle that the song has special meaning because it pretty well describes her drummer, Samantha Banks.

Sheet: Have you become more political over time?

Foster: I’m politically aware, but I try not to get too deep into it [in terms of songwriting].

What Foster does sing about so well, so achingly well, is about love, loss, relationships, the human condition.

Her cover of Johnny Cash’s “Ring of Fire” is so powerful that her producer at the time, John Chelew, said “It makes my heart hurt … but I had to put it on there [her 2012 Grammy-nominated album ‘Let it Burn’].”

Foster said she wrote the arrangement for “Ring of Fire” somewhat by accident. She had come off a tour with Bo Diddley and was a little under the weather. “I was just playing piano, playing chords … and the lyrics just sit with that chord progression.”

“Harder Than The Fall” is another much-requested song, but as Foster says, “It’s hard for me [to play], because I know where it came from.”

In terms of what to expect this weekend, Foster said she makes a set list before every performance, but rarely follows it. Often, she’ll listen to other acts who go on before to get a feel for the crowd and make adjustments.

“My band expects it. They’re pros. They know how to switch sticks and guitars just based on the intros [to the songs].”

Despite the many genres and musical influences in her life, Foster says she always comes back to the guitar, picking and singing the blues, gospel.

“I tend to write more in-depth songs when I know I’m heading somewhere, as part of a journey,” she says. And as she tells young songwriters (she still teaches a workshop once in awhile when she has the time), “Just write about what’s going on.”

Foster answered the question by referencing Lucinda Williams, who once said something to the effect of, “I’ve stopped writing. It must be time to break up.”