Connie Adele Black was born June 24, 1938 in Las Vegas, the daughter of Ralph J. Tanner and Nelda Tanner.  Her parents were industrious and frugal.

When she was a girl, her family moved to California and settled originally in Montebello, where her parents also opened a community grocery store.

Connie was part of the first class at Cal High in Whittier. It was here that she met future husbands Paxton Lockhart and Ron Black. 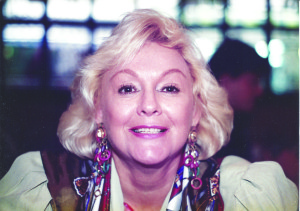 She attended Brigham Young university in Provo, Utah and tried out and made the squad of the Cougarettes. She loved telling her grandchildren that she was a Cougarette!

She married and had three children with Paxton D.  Lockhart: Ralph Lee, Kelli Ann and Kathy Suzanne, beginning in 1957.

When her children were finally all in school, she got restless (and ambitious) and decided to become a nurse, enrolling  in the nursing program at Cal State Long Beach.

Mom always kept a neat and tidy home and she expected the children to do the same. Especially when she was in nursing school and as she began her career, all the kids had their chores. She was an efficient taskmaster.

When Paxton was transferred to Cape Canaveral in 1971, Connie became the Director of Nursing at Cape Canaveral Hospital on Merritt Island. She also taughts EMTs and paramedics at Brevard Community College. She had a flair for teaching and she and her partner Judy Eighmy launched their own consulting firm called Heads Hospital Education and Development Systems. They ultimately ended up doing nurse consulting all over California. Nurse Consulting led to a new dimension in their careers as they realized there weren’t many good texts for training certified nursing assistants. They were contacted by a publisher and soon had developed a Nurse Aide Training Manual that was published and became the most highly used training book in the nation. This led to training videos as well. Mom quickly lost her patience (imagine that!) for filming training videos, as they would require many, many, many takes to get it right and by the end of the day there would only be eight or 10 minutes of what they called the “final cut.”  She improvised by assigning all the video work to Judy so she could “get more done.”

Her consulting work ended up eventually in ownership of Skilled Nursing Facilities, where she earned a reputation in the industry and with the Health Department as a caring and competent operator. Her hospital career has spanned several decades and she has maintained a special Mental Health inpatient program at her Westminster hospital with the County of Orange for over 30 years.  The program was so successful and cost saving to the County that they approached her about expanding it in 2004. There are only three facilities in Orange County doing this special kind of work and Connie operated two of them.

With the advent of Hospice Care and the realization that end of life care and choices are difficult and important, Mom and her partners developed the First Hospice Home Health Agency in California (later sold to Vitas) called Community Hospice Care. This grew to the largest Hospice-related home health agency in California and was soon targeted by the largest home health group in the nation for acquisition.

She eventually sold her company to Vitas Healthcare in 1995 and decided with her husband Ron, who had recently retired from the L.A. County Sheriff’s department, to retire in June Lake. They bought a wonderful piece of land below a waterfall in a horseshoe canyon and built their dream cottage.

However, neither was the retiring type and they had lots of energy. As they looked across the street and found the 13 acres there for sale, they decided to build a resort/spa so that they could share their passion for this beautiful valley with others. In 1999 they finished phase I of the Double Eagle Resort and Spa.

She later bought/rescued the Snowcreek Athletic Club in Mammoth in 2007.

A summary of what Connie taught her children: Work hard, do a great job, do it with flair! Have fun! Travel, learn, enjoy good food, have family vacations and time, care for people at all times of life, education is vital, plan ahead, pray, be thankful.

On the subject of enjoying good food, Kathleen Rudder tells a great story about going to some weight-loss spa in Ojai with Connie. After about a day or two, they got bored of losing weight and snuck out to a local restaurant—and ended up sneaking out for dinner every night for the rest of their stay. In short, Connie Black was really good at doing what Connie Black wanted to do. That’s what made her so memorable.

Connie’s memorial service will be held this Saturday, August 29, in Newport Beach. Make gifts in her memory to LDS Charities (www.ldscharities.org).