Another local case of embezzlement (see Sally Symons story on the featured story) was finally brought to a close in Independence last Thursday in less than an hour as Delores “Lola” Marsh, a former employee of the Inyo Mono Body Shop, pleaded guilty before Superior Court Judge Brian Lamb to one count of grand theft and one count of forgery. Under a plea agreement, she agreed to accept a sentence of two years in the Inyo County jail and pay $322,000 in restitution to the business where she worked as a trusted bookkeeper for many years.

The guilty plea comes after an investigation by the Bishop Police Department (BPD) which was initiated in early 2013, examining records going back as far as 2005. According to a press release in April of 2014, BPD pored over thousands of pages of financial records, executed numerous search warrants, collected evidence and interviewed dozens of witnesses. Based on the evidence, investigators concluded that over the course of several years more than $200,000 was embezzled from the body shop and that multiple possible crimes included Burglary, Grand Theft, Embezzlement, Concealing Stolen Property, Forgery, and Making False Record Entries.

Marsh was officially arrested and charged in February of this year on five counts of grand theft, five counts of forgery, and altering entries in books and records. On Thursday she pleaded guilty to making purchases from Target in excess of $46,000 between December 2009 and April 2013. Other charges were dismissed under the plea agreement.

The terms of the plea agreement are that Marsh agreed to serve two years in County Jail and pay $322,000 in restitution to the Inyo Mono Body Shop. The first installment of $100,000 is to be paid at sentencing and then a schedule of payment for the remaining balance after Marsh serves her sentence.  According to her attorney Victoria Campbell, Marsh will be listing her home for sale, which might require additional time.

Sentencing has been set for Wednesday, Jan. 20 at 1:30 p.m. at the Bishop Superior Court with Judge Brian Lamb presiding. Lamb instructed Marsh to have her affairs in order by that date. For now, Marsh will remain free on $50,000 bail.

Ron Napoles, Recreation Park Ranger for the Bureau of Land Management’s (BLM) Bishop Field Office, has received this year’s national award for contributions in the field of interpretation.

Ron was recognized for developing and designing a set of interpretive panels in collaboration with the fourth through seventh grade classes at Round Valley Elementary School in Bishop. The panels are being used on a nature trail at the Horton Creek Campground, managed by the Bishop Field Office. 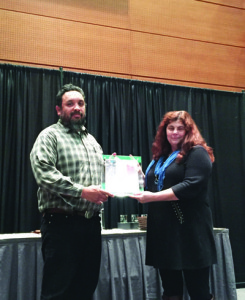 In the fall and winter of 2014-2015, staff from the Bishop Field Office joined multiple partners to provide a series of classroom lessons to the fourth through seventh grade classes at the school. The classroom workshops taught students about local wildlife and plants, the Paiute people and the geology and ecology of the Eastern Sierra. Students also did their own research on the Sierra Nevada. As part of their lessons, they wrote text, drew and colored pictures, and created maps and images about what they learned.

“Ron took the text and illustrations made by the students and made a set of beautiful and creative interpretive signs for the nature trail,” said Jeff Starosta, Acting Supervisory Resource Management Specialist. “By engaging local school kids in creating the panel content, the Bishop Field Office, Ron in particular, helped to realize the primary goal of BLM’s Recreation Strategy: to connect with communities.”

Nominees for the award were evaluated on the basis of their success in enhancing the public’s understanding of the cultural and natural resources of our public lands, supporting BLM goals and objectives, helping the public to recognize their connection to public lands, creating programs that are accessible to diverse audiences, involving partners and developing strong working relationships with local communities.