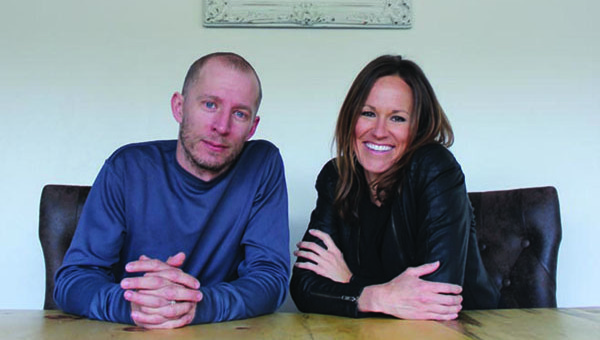 Black Velvet Coffee’s sleek new wine bar feels almost a little too cool for Mammoth—the clean lines, welded steel and understated wood tables are an extension of the coffee shop, and all of it gives the impression that one has stumbled off the streets of Portland or San Francisco.

“It’s just a combination of what we love,” said Gracie Hammer, who, with her husband Matt, opened Black Velvet Coffee on Dec. 26, 2011—three days after their youngest daughter was born.

“From growing up here, I’m sick of the traditional old cabin-y ‘70s Mammoth style,” she said.

Traditional isn’t what the Hammers are doing in their space in Mammoth’s Luxury Outlet mall. There’s an industrial metal fence lining each of the staircases in the three-story building.

“I was like, ‘I want to put a playground fence in the shop.’” said Matt Hammer, who spent over two months working from 9 p.m. to 6:30 a.m. on the new wine bar so as not to disturb customers when the shop was open.

“Everyone said ‘Don’t do that, it’s a waste of time.’ Well, it was 250 hours of welding … But it came out exactly like I wanted.” They have installed a fully-custom 350-cubic-foot wine cellar with a glass wall that faces guests as they ascend the stairs onto the second level of the building and filled it with over 400 bottles of small-batch wines.

They serve a hearty $16 cheese plate and fresh Belgian street waffles which, somehow, pair perfectly with a syrah.

They rotate which wines they choose to serve by the glass and offer four rotating beers on tap. When I came by to visit, Matt Hammer offered a choice between Samsara’s 2014 Pinot Noir and a Levo Mint Syrah. Hammer described how he and Gracie had spent their wedding anniversary in the Santa Lucia highlands and participated in Samsara’s fall wine crush. “So yeah, my wife’s feet touched all these grapes!”