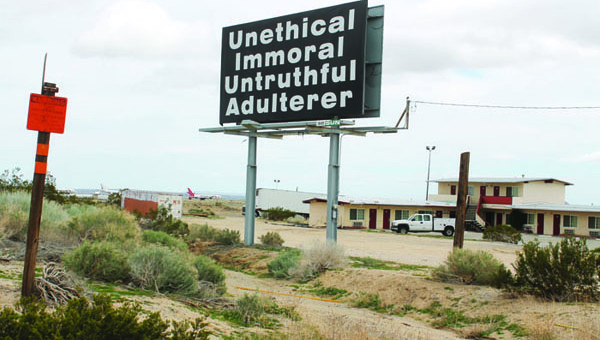 When Lunch drove past the billboard (shown below) in Mojave on his way to Los Angeles a few weeks ago, all he could think was, “Wow, there’s a woman scorned around here that’s none too happy.”

So I got the plum assignment of tracking this person down.

Turns out it wasn’t a woman and the billboard is non-specific. You’ll be relieved to learn it’s just targeted at sinners in general.

Talk about a happy Easter message.

Sun Outdoor Advertising told The Sheet this week the board should be empty and might be cleared by the time you read this. “We’d never put up anything as stupid as this,” said Sun Advertising, owner of the billboard, adding it sounds like the ranting of “religious extremists.” The responsible party faces charges of theft, vandalism and trespassing.

Mojave resident Curt Skelton said he didn’t erect this sign, “not on a cognitive level,” but he said he has helped put up some of the more than 60 religiously-themed signs in the greater Mojave area.