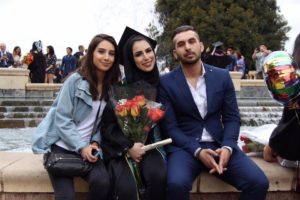 Ahmad Tamim Najib’s family experienced a nightmare on Sunday, August 21 when the 28-year-old Tustin man became trapped under water below lower Rainbow Falls at around 4:15 p.m. It was a “horrific accident,” Lamba Najib, Ahmad’s sister, wrote in an e-mail to The Sheet. She said she was at Rainbow Falls with her younger sister and many of their extended family when her brother disappeared into the San Joaquin River. Mono County Sheriffs Office called the Madera County Sheriffs Office around 4:30 p.m. on Sunday, according to Bill Ward, Public Information Officer in Madera. Rainbow Falls is under Madera’s jurisdiction. “Because it’s on the other side of the mountain, Mono County SAR [Search and Rescue] and Mammoth Lakes Fire did the initial rescue efforts,” Ward told The Sheet. “They were not able to get him out and people at the scene said he’d been under water for over an hour, so it turned into a recovery operation at that point and our SAR team drove over.” Ward told The Sheet that family members tried to rescue Najib and were unable to pull him from the water. A Mono County Sheriffs press release stated that a second victim was suffering from hypothermia, but was rescued by responders. “It looks like there were about 20 family members and friends there,” Ward said. “The decedent decided to jump into the pool of water below Rainbow Falls. He apparently popped up, then went under, and never came back up … he was stuck under a rock, basically.”