Harris was charged with first degree murder and manslaughter after law enforcement found his dead wife, Betty at their residence in Chalfant Valley on June 19.

Mono County District Attorney Investigator Chris Callinan was questioned by Mono County prosecutor Dave Anderson as to what was found and collected at the crime scene, the Harris home.

Mono County Sheriff’s Department was asked to perform a welfare check on June 19. Harris’ sister, Mary called the authorities after finding a message on her answering machine from her brother. The recording was garbled but he clearly stated, “I killed my wife,” and asked Mary to come to his home. Harris left the message at 11:30 p.m., June 18 but she didn’t check the messages until the next morning. 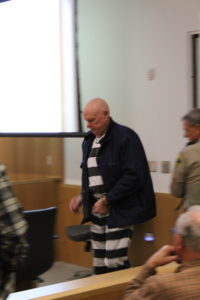 Mono County Sheriff Sergeant Seth Clark was first on the scene. According to Callinan, Clark found Harris in front of his house, rinsing “copious amounts of blood” off rugs hanging on a clothes line.

Harris was calm, Clark reported. Harris told him he had shot and killed his wife. Clark found Betty Harris in the bucket of a backhoe on the property. Callinan added that there were tire tracks leading east, for a couple hundred yards, from the Harris property ending at a large area of disturbed dirt.

Anderson told The Sheet in a separate interview that authorities excavated the Bureau of Land Management land at the end of the tracks, but there have been no excavations on the Harris property by authorities. He added that Harris had been digging in his own yard to bury equipment.

According to Callinan’s testimony from interviews with Harris on June 19 and 20, he and Betty were sitting on the porch at dusk of June 18, drinking Bud Light, talking about an upcoming vacation. Betty said she was going inside for another beer but went into the craft room instead.