Stories from the Sage: Tales from California’s Eastern Edge

Giles: Chris Langley is the Executive Director of the Lone Pine Western Film History Museum. He has lived in Inyo County for thirty years and first came to the Eastern Sierra to teach public school in the now defunct mining town of New Idria. He is also a scholar of cowboys.

Chris: Hi I’m Chris Langley, I live in Lone Pine. I’m a writer now, full time, but I was an educator and I’m still active in the county schoolboard. I’m very interested in film. I’ve been the film commissioner of Inyo County for the last 8 years or so and have worked with a lot of different actors and directors and that has led me to understand and explore the history of filming in Lone Pine, Death Valley, and the Eastern Sierra.

From that I have learned that here, film and landscape go hand in hand. That’s been my primary interest is looking at how landscape affects people’s lives and their art and vice versa- how we affect the landscape.

Giles: Chris could you tell me a little but more about the relationship between landscape and film in the eastern sierra?

Lone Pine films are really heavily cowboy films. Not exactly sure why that is except that there are certainly are a lot of ranches in the Owens Valley.

Death Valley films have a very antagonistic landscape where people are trying to survive. The same is true with the Eastern Sierra films. They have lots of snow, have mountains, high plateaus, winds, and then also pastures that are really rich for cattle ranches, so each one has affected the movies that are made there. And vice versa. I think people have affected the landscape, but the landscape has really made us who we are today.

Giles: How do you feel that the culture of cowboys has shaped and continues to shape the Eastern Sierra’s culture?

Langley: In film I’ve explored the idea of the hero. I’ve done presentations on Luke Skywalker and the journey of the hero. There are stages that Joseph Campbell identified. But I think that we all look up to this icon, this ideal, and it’s been kind of converted into a cowboy ideal, even though I know cowboys who don’t live up to it.

Most cowboy people, ranchers, have been shaped by it, and so the ethics of it is very strong in our culture and in individuals. And so, I think we really value the hero who will stand up for the community even when no one else will stand with them. It could be a lone figure of a cowboy, not really a cowboy, but someone who is like a cowboy, standing up against the adversity or the enemies of the community.

So it’s a real strong relationship between this hero and building their community. So when we look at the history of The Owens Valley and of Inyo and Mono counties, we see heroes who really spent their whole lives not only raising their families, and traching them good ethics, but also who earned a living. And to earn a living you had to work with the landscape, respect it, but also tame it. And so that’s all part of the cowboy ethic I think.

Giles: Do you think that there is a code of ethics that goes along with that cowboy figure that is transferable across genres and storytelling and time? You mention luke skywalker and other heroes we have in films shot in this area.

Langley: Yeah, absolutely that’s how it works, that the hero, and in our case the hero is a cowboy hero, and certainly there are cowboy types in other cultures, vaqueros and things like that in South America and Mexico, but it doesn’t have to be a cowboy. It’s just that it’s a very strong icon that we’re all familiar with.

I like to point out that a lot of presidents want  to put on a cowboy hat even though they’re not cowboys because we respond and deep within ourselves recognize that that’s a hero. It doesn’t have to be a cowboy though, it could be an astronaut, it could be a minister, it could be  a school teacher. It could be other kinds of people who are willing to stand up for something that is right even when the world seems against them.

Langley: First of all, I think that John Wayne is the number one person. He’s a very interesting, complex character, and everybody has a somewhat different reaction to him. I think that he’s the cowboy hero that everyone knows in terms of film.

Then probably Roy Rogers is less well-known, but he would be one of the kings of the cowboys. And if you go back in film history, you get to Tom Hicks, who made over 200 films, and worked in both in Inyo and Mono Counties, as did John Wayne, and as did Roy Rogers.

So that was a kind of ideal, and people would see it and begin to be influenced by how they behaved. Now I hesitate to name actual people, but I think there are a lot of ranchers in our different communities who have lived up to that.

In Lone Pine, which is where I’m working now mostly, I think Russ Spainhower would be a person like that. He’s interesting because he worked not only with ranching, but he worked also with films. Maybe Judge Lubkin who was a Supervisor going back a ways, was a judge, and had a ranch, would be another person like that.

I think they were influenced either consciously or unconcsiously by the ideas of the cowboy and you can go back to The Virginian, the book, you can go back to a lot of different writers, Zane Grey [the author of The Lone Ranger series], and I think that that influenced them as youngsters perhaps, and gave them something to live up to.

Now we struggle with that to a certain extent. But I think it’s still active. I think we know what we want and most people try to live up to the ideals that they have. I don’t think all is lost even though some days when you turn on the television you get discouraged by what you see being reported.

I think we still care about ethics and how to behave.

Giles: You talked about the hero that stands up for their small town in particular, even when the town doesn’t stand behind them and does what’s right when it’s hard, or there’s sort of something, you know, looming. Are there qualities of life in the Eastern Sierra or things in our history or in our past that have particularly fed that sort of hero culture or that have provided opportunities for people to step into that role?

Langley: Yes I think so. I am a big fan of our supervisors in Inyo County. I think they are the best Supervisors we’ve seen in 40 years and I like the way they react to each other and I like the way they stand up for their communities. It’s a tough job–let’s face it– They still stand up for what they believe is right, and they manage to support each other, even when they don’t fully agree with each other.  And I think those are really wonderful characteristics and I really admire that.

I know we have some educators who really go the extra mile for their kids and I think that’s part of that ethic of being a hero.

And it’s an unsung job a lot of times. You don’t really notice it. I’m not always that optimistic, but I taught for 30 years and I want to make sure that we’re always saying that there’s hope for the kids, that no matter how many challenges we see in our country and in the world, that there’s still hope that they can have a place and make it a better world for the next generations to come.

Langley: You know it’s really funny. Why do people live here? It’s a hard lfie, let’s face it. It can be cold and bitter in the winter, it can be very hot in the summer. We’re coming off of a hot summer, we seem to be escaping the drought, but only time will tell. This spring, we had too much water, and yet people still hang out there and fight, and actually love their land very much. I’m amazed every day I still hear people expressing how much they love living in the Owens Valley.

I bet people who don’t live here kind of go “What? Why would they want to live there?”

There aren’t any trees, it’s a harsh climate, it’s dusty, you know, all of those kinds of things that we are always addressing. I think it makes us strong. I think it makes us love more because it’s harder. Now, I’m not saying other places are easy, but I do think we really love the land. People come back here even after they’ve left because they have some of that dust and sand in their boots and it always brings you back home. So there’s a real strong sense of desert living. I can’t explain it. It seems almost mystical or strange. It’s like soul, it makes you who you are.

Not every day–we all whine I’m sure–but its just how much they want to be here. I hope other people in other lands and landscapes feel that way as well. 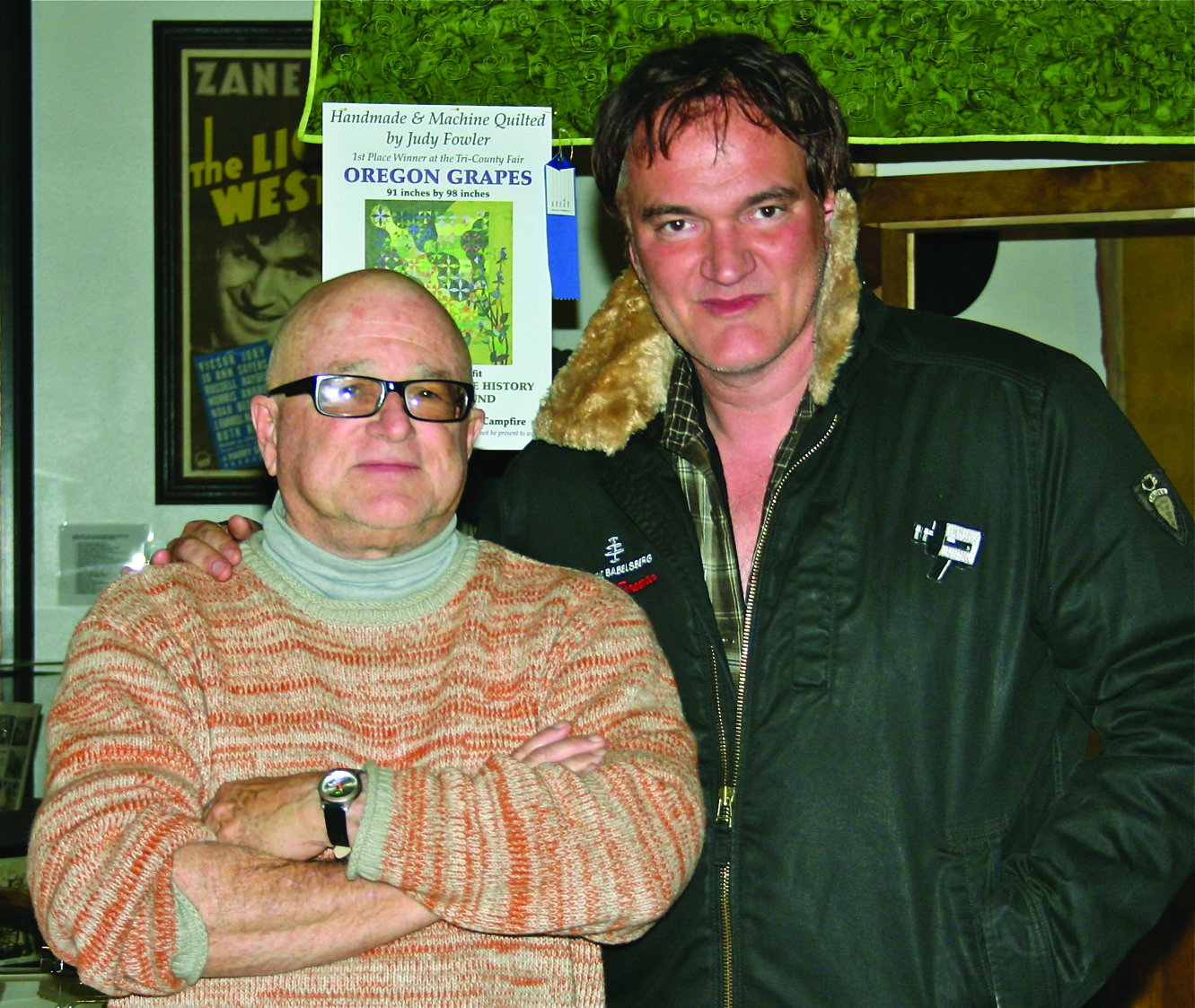