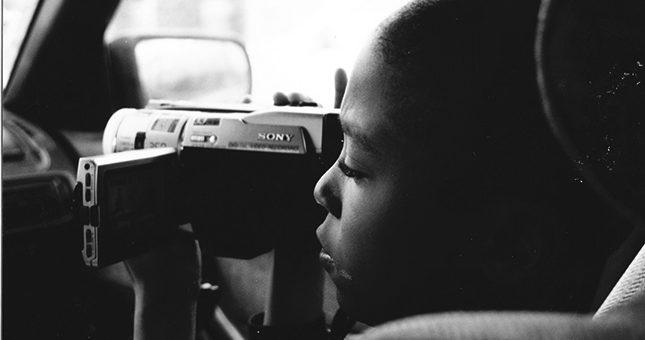 17 Blocks follows the Sanford-Durant family for 20 years, recording them as an example of the suffering and resilience so common in the United States. The title, 17 Blocks, refers to the distance that this family lives from the Capitol building in Washington D.C. The title leads the viewer to assume that this film would compare policy with humanity, as so many modern documentaries do. It doesn’t. Not once is there a shot of the Capitol, or of politicians, or any of the sights that make D.C. recognizable to most. They are invisible to the viewer just as they are to the subjects of this film.

The proximity to lawmakers is denoted in the title and left, only to return as a dark memory while you watch boys beat each other in the street over drug money. During the bleakest scenes of this documentary, you remember how close the politicians are who have done so little to help this situation, or worse, who have enacted laws to help cause it in the first place: the 13th amendment, Plessy vs. Ferguson, the war on drugs.

The geography of this film has no impact on the story. It could have happened anywhere in the United States, but that it happened there matters. If a community that is practically within sight of the statue of Columbia on the Capital Dome could be so neglected, then anyone on Earth could be.

The footage is so intimate as to feel staged. When talking about this documentary I found myself consistently referring to the subjects as “characters.” I was subconsciously trying to detach myself from their hardships, but I also just continually forgot that this footage was real. This film reveals a family like no documentary I have ever seen. It records drug use, domestic abuse, drug sales, courtroom drama, and fights all with the casual confidentiality of a conversation between friends. It should be stated that this film was not staged.

The 20 years of footage was filmed partly by Emmanuel Durant when he was a nine-year-old aspiring film maker and was later resumed by Director Davy Rothbart. The amount of footage and timeframe of the film reveal a cycle of destruction in Sanford-Durant family. Death of father figures, drug addiction, teen pregnancies, and incarceration are passed down through the family like societally imposed DNA.

To say that suffering is all this documentary records would be looking through too narrow a lens. Rothbart captures a charming and buoyant family trying to break their cycles of poverty and addiction. The loss that the Sanford-Durant family endures is not uncommon, but this family has no outlet for their pain. We watch each member blame themselves for a death in the family and turn to drugs and alcohol to close their minds and try to forget the shame.

Eventually, the subjects seek out counseling to help them break the cycle. In these moments too, the viewer remembers the lawmakers 17 blocks away and hopes that they had some hand in funding these much needed respites.