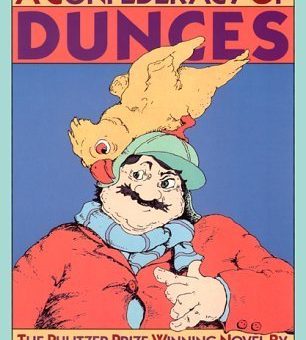 A Confederacy of Dunces

It is a shame that John Kennedy Toole is not alive and writing today because Toole wrote one of the most enjoyable novels of the 20th century. A Confederacy of Dunces bounces cheerily along for 462 smart, surprisingly wieldy pages chronicling Ignatius J. Reilly as he tries to find gainful employment in New Orleans.

The story is wild, and the book’s history is just as wild. Toole attempted to get this book published unsuccessfully for months in the late 1960s and killed himself shortly after shelving the book in 1969. Toole’s mother found a carbon copy of the book and spent a decade trying to get it published. She was more persistent than her son, and eventually beat down the door of author Walker Percy and convinced him to read it. Percy saw its genius and had it published in 1980. In 1981, it won the Pulitzer Prize for fiction.

A 21st century reading of Dunces found the book to be far ahead of its time. Toole, with his brash, misogynistic main character, was a harbinger. Though Ignatius Reilly was wholly original when Toole created him in the early 1960s, his type has become a trope in some circles of contemporary pop culture. Ignatius is the prototype of the modern Incel, a brand of internet troll with a fierce moral superiority complex and a belief that society has rejected him. Ignatius is grotesquely fat and dresses in a harlequin outfit of flannel and tweed. He dismisses modern standards of personal hygiene. He rarely strays from his musty room where he writes invectives on the lack of “taste and decency, theology and geometry” in the modern age. He believes that world culture peaked during the medieval period and began steadily decaying with the Renaissance, and he has sworn himself to celibacy, believing modern women’s behavior to be an affront to his morality.

And yet his sheets are cum-stained.

Ignatius Reilly perfectly parodies the useless, overeducated, self-assured man-boy-still-living-with-his-mother who has only become more common since the book’s publication.

Dunces follows Ignatius as he is forced into society after what he believes to be a decade-long Miltonian retreat of solitary philosophical reflection. Through the course of his debut he tramples social norms like a hot dog-fueled bull in a china shop. Every situation he enters combusts upon reacting with his loud uniqueness. His increasingly vitriolic behavior is not taken seriously until it causes society to implode. When you think that he has reached his social crescendo he always manages to do something even more outlandish, to the increasing amusement and discomfort of the reader.

New Orleans is one of the most important characters in the book. Toole exposes the eccentricities of New Orleans with a skill approaching Joyce’s exploration of Dublin or David Foster Wallace’s of Boston.

While on the topic of Wallace, it should be noted that Toole’s influence on “Infinite Jest” is obvious. Any Jest lover will see the parallels between these two tragicomedies. Both follow characters through fantastic situations where nothing is normal and the absurdity builds to a fever pitch. Against such kaleidoscopic backgrounds, the biggest laughs come from the banal moments standing out from the absurd like a black spot on tie-dye. Wallace seems to have stolen one character; the comedic cop who cross dresses unconvincingly, brazenly from Toole. But as T.S. Eliot said, “Good writers borrow; great writers steal.”

Toole’s prescience really shines in his descriptions of the violent nature of Ignatius’s sociopathy. Ignatius attempts to found violent political uprisings everywhere he goes. When they fail, he blames his sexually awakened girlfriend in New York for spurring his worse tendencies. A clear through line can be drawn from Reilly’s violence to that of the modern Incels who mirror him so closely. The shooters who killed 6 people in Isla Vista, California in 2014, 9 people in Roseburg, Oregon in 2015, and 17 people in Parkland, Florida in 2018, all identified as Incels. Their violent rage was motivated by pseudo-political regressive ideologies and misogyny, just like Ignatius. While Ignatius’s social isolation was almost absolute, these modern renditions have the internet to allow their philosophies to feed off each other and fester. Toole was able to masterfully lampoon Ignatius and his ideologies in the 1960’s. A modern version of this humor would be welcome to help the rest of us cope with the surreality of the violence of Ignatius’s modern imitators. For now, Toole is enough.