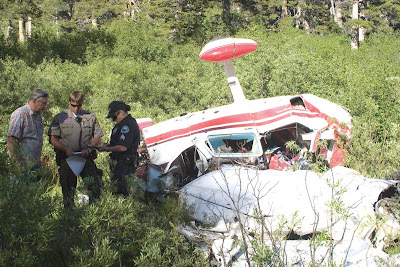 A single engine Cessna with two aboard plunged into the woods beside Twin Lakes on Wednesday afternoon, killing both occupants.
According to Mammoth Lakes Police Det. Doug Hornbeck, the plane was observed by an Old Mammoth resident, who is also a pilot, on its way up to the Lakes Basin. The witness also told Hornbeck he didn’t think the plane would make it.
Sheet reporter Devon Fredericksen was in the Lakes Basin at the time and spoke to eyewitness Deborah Warner, a visitor to the Mammoth Lakes area.
She and her family were hiking above the waterfall on the west side of Twin Lakes when they witnessed the plane crash.
“The plane made a sharp turn, really low to the water. Then we heard a snapping noise, and that was the end of it. We didn’t see the plane again,” she said.
The wreck site reeked of gasoline, and MLPD Chief Randy Schienle said he believed the plane had just fueled up. A creek leading into the lake ran right by the site, so there is some concern regarding lake contamination.
Federal Aviation Administration spokesman Mike Fergus said the plane had indeed refueled at nearby Mammoth-Yosemite Airport, but added that its origin and destination were unclear because no flight plan was filed. He also said the pilot didn’t report any problems and the cause is still under investigation.
Late Friday, Mono County Sheriffs Department said the victims were identified as Donald Alan Hall, 52, of Dallesport, Wash., and Sherril Dene Wilson, 54, of Turner, Ore. The plane was reportedly registered to Regeneration Reservation, an Arizona-based Christian ministry that serves American Indians. Hall and Wilson were reportedly traveling from Phoenix, Ariz., en route to Washington state.