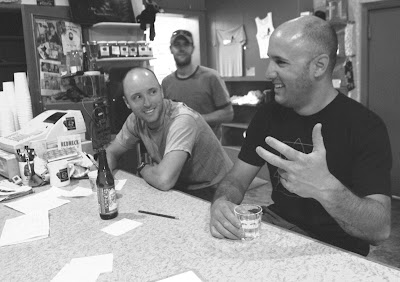 Perhaps Bishop’s first (annual?) Haiku Slam took an ancient form of poetry and bastardized and Americanized it until it was stripped of all its spiritual purity. Perhaps the event rendered haiku devoid of its enlightening nature. Maybe Bishop has a better sense of humor than Japan. That or less taste.
On Saturday, July 11, the Black Sheep Coffee Roasters and Spellbinder Books hosted Haiku D’Etat, a night of competitive haikus, beer, wine and hors d’oeuvres. The poems produced for the event were, at times, a bit uncouth and sassy, but what the haikus lacked in spiritual depth, they made up for in sexual innuendo and inside jokes.
To start off the night, Black Sheep employee Elliot Piff read winners for the pre-event submitted haiku contest. The categories: coffee, biology … and miscellaneous. The winners:

Coffee
My stem wand is hot
and ready to be plungèd
into your whole…milk.
-Elliot

Biology
Sitting on the floor
I smell my friend’s rancid feet
I like them less now.
-Anonymous

Miscellaneous
Poets love themselves —
always so goddamn pensive.
No one gives a shit.
-Abbie

Writers filled the café, and set about crafting one haiku each in three different categories: coffee/books, nature and pop culture. Participants could compete in teams or alone, and were given 15 minutes to write their three haikus for the night. Pairs then faced off at the mic and the winner between the two moved on to the next round.
To judge the contest, an oscilloscope was brought in to measure the sound waves produced by applause from the audience.
“Science is our judge tonight,” said Lynn Almeida, co-owner of Spellbinder. “The oscilloscope has 5 megahertz of bandwidth. So I don’t think we can argue with that.”
The winner of the night was Kim McGovern and her family, who said they thoroughly enjoyed the evening, and took home a T-shirt as spoils of their victory.
Black Sheep employee Joe LeMaster said a haiku slam makes a mockery of the traditional haiku, but in terms of bringing community together for a collective, creative endeavor, the event is a good idea.
“We chose a form with very simple requirements and a short length for people who aren’t normally poets to try something new,” Piff said.
Traditionally, a haiku consists of three lines, using five syllables for the first line, seven for the second, and five for the third. Haikus are often used to experience the senses of the world, usually focusing on a single, insightful moment in time.

The term “haiku” comes from a form of Japanese court poetry called “tanka,” which often had a structure of five lines with a 5-7-5-7-7 syllable structure. Tankas were usually written by multiple people and were strung together to form longer poems. The first part of a tanka was called “hokku,” the term from which “haiku” eventually stemmed. Great masters of hokku usually wandered the countryside, seeking direct contact with nature and the human condition.

Why hide a nice scalp?
In some cultures bald is good
Bishop’s might be one.
-Reed

Although simple in form, haiku often takes years to master. It uses the Japanese aesthetic of “Yugen,” a term for a complex form of beauty, and spiritual concepts of Buddhism to create a poem that suggests a deep understanding of the physical world and the often transitory nature of all existence.

I should be at work…
Instead, at the bar I sit.
Adios, paycheck.
-Robin

Whether mockery or enhancement of this ancient artistic medium, patrons of the coffee shop and the book store hope the Haiku Slam will become an annual — or even a semi-annual — event to look forward to.