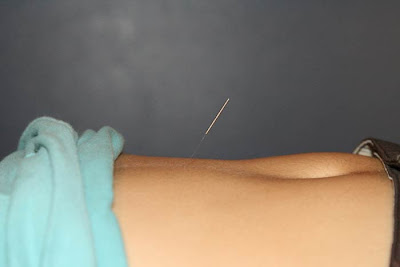 The author takes one to the midsection. (Photo: Drummond)

As luck would have it, stress over my imminent loss of health coverage (to be lost, it appears, the moment I graduate from college on Aug. 22 and lose my “student” status) may have caused me to wake up with immobilizing back pain on a recent Monday morning.
Although I’ve had chronic back pain since my teens, this was the worst I’d ever experienced. Feeling debilitated and pathetic, I knew I should seek medical attention. Like the good Sheet intern I am, I decided to turn my suffering into a story.
In anticipation of losing health care coverage and beginning to truly live on the fringe of financial security, pursuing a career that is anything but lucrative (freelance writing) — it seemed as good a time as any to explore my options for affordable medical care. I spent the morning calling doctors and chiropractors, none of whom could schedule an appointment until the following week.
I decided I couldn’t wait that long.
I also didn’t want to spend hours sitting in a hospital waiting room, given that the only comfortable position was lying flat on my back.
Finally, I called an acupuncturist by the name of Howard Wu, located in Bishop. He scheduled me for Thursday. About a week later, I followed up with a session with Mammoth-based acupuncturist Jean Drummond.

The sweet, mysterious smell of Chinese herbs and essences filled Wu’s office. Stacks of boxes, books and jars labeled with cryptic words added to the mystical atmosphere. This was way cooler than a regular doctor’s office, and way more cluttered, I thought.
In contrast, Drummond’s office was sleek, organized and decorated with professional, framed photography. Besides several acupuncture posters hanging on the walls, few signs of ancient Chinese knowledge sprung out from the décor.
Wu was welcoming, and after I filled out minimal paperwork, he asked me about not only my aches and pains but my lifestyle and stress level as well. Although some medical practitioners are an exception, most doctors only seem to ask those kinds of questions to fill silence. Wu seemed genuinely interested, using the information to deduce how different factors in life could be contributing to my back pain.
Drummond also asked questions about my lifestyle and diet, to determine the points of life stress that could be contributing to pain or tension in the body. She decided to give me her special “relaxation” treatment.
The next part of both sessions was similar to a doctor’s visit, but with an ancient Chinese twist. In place of normal medical tools, such as a stethoscope or blood pressure cuff, the acupuncturists used visual and physical observations to check my heart rate, tongue appearance, ear condition, abdomen, sternum and points of muscle stress.

After both preliminary exams, it was time for the needles. The sensation of a needle piercing my skin was similar to a small pin prick, but once the needle was in, I couldn’t feel a thing, except for an overwhelming desire to take a nap.
Apparently, the relaxation one feels after needles are placed is similar to a trance. Acupuncturists normally leave a patient for about 15 to 20 minutes to allow time for energy to flow thoroughly throughout the body.
One principal goal of acupuncture is to restore the body’s balance of energy. Wu described it as a balance between Yin and Yang, or a person’s place between Heaven and Earth. Wu said humans are made of both heavenly and earthly components and when we align ourselves appropriately between both, our bodies become microcosms representing the wholeness of the universe.
Although I couldn’t discern whether my body had become a microcosm, or if my Yin and Yang were fighting for equality, my relaxed back muscles sure felt good.
During my session with Drummond, she explained how the body is made of energy pathways called meridians, which are like rivers that connect to different organ systems. To maintain good health, the rivers must flow freely. When meridians become imbalanced or clogged, pain will manifest. Acupuncture stimulates points along the meridian and frees energy to move.
After removing the needles, Wu performed a procedure called “cupping.” Before starting, Wu gave me the disclaimer that, “People either love this or hate this,” and then I felt as if a large octopus had suctioned a fiery tentacle onto my back.
Wu explained how not all tension in muscles can be relieved from pressure. Sometimes it’s better to pull up on tension, which requires suction and can be achieved by warming up glass balls with flaming cotton balls, and adhering the “cups” to tense parts of the body.
After removing the cups, my session was over. Wu said people often feel a strange sensation like “floating” after experiencing acupuncture. As he was saying this, I nodded stupidly, realizing I needed to float back down to earth to conduct the rest of the interview.

In college, Drummond studied medicine until she realized she wanted nothing to do with it, and fell in love with journalism instead. After she got her fill of reporting, Drummond found a job in marketing, and the stress of her work made her turn to acupuncture for relief. After she discovered its healing effects on her body, she knew she wanted to help heal others, not to mention work on her own health.
“Health care providers don’t take care of themselves very well because we’re busy taking care of everybody else,” Drummond said.
Maintaining a balanced diet is one way she is helping herself. Nutrition is the key, she said, to good health, and 80 percent of her patients have problems with diet.
“Nutrition is huge,” Drummond said. “Acupuncture is great by itself, but as a patient, you have to take responsibility for yourself and ask, ‘What am I doing that’s harming my body?’”

The world of Wu

Wu said his father was an acupuncturist, which was part of the reason he chose the field. Born in China, Wu’s father became a pathologist who worked in general practice during the Chinese nationalist era. Since he was a doctor he was made an officer, and since he was an officer, he needed to leave China when the communists took over. Due to his native Chinese blood, Wu’s father made the perfect archetype for acupuncture in the United States. Ironically, however, he didn’t take good care of himself, was diagnosed with diabetes, and died at 56.
When I asked Wu whether he took better care of himself he said, “That’s kind of an embarrassment. I’m an American. Just the fact that I left the city to come live in the mountains was the biggest move in incorporating Taoism into my life.”
After graduating from college with a degree in biology, Wu attended the Five Branches Institute for four years, a college for Traditional Chinese Medicine in Santa Cruz, and earned his certification in acupuncture in 1988.

Wu said considering his background in science, acupuncture was an odd choice for a profession. Scientists have developed many theories about acupuncture, but the actual scientific effects on the body have yet to be determined.
Wu said some believe in the neuro-peptide theory. After the needle pierces through the top layer of skin, past the sharp receptors of the epidermis, the needle can penetrate deeper to the acupuncture point, about a fourth to a half inch below the skin’s surface. Once placed, the needle activates the peptides that begin to secrete hormones into the body’s tissues. This facilitates energy circulation through the body. But for people who want a scientific explanation, the term “energy” just doesn’t cut it.
“My brain loves science, and this is the most unscientific thing I could be doing,” Wu said. “If it was up to me, I’d be a mad scientist; this is just the family trade.”
Drummond explained the effects of acupuncture using a different theory. She said when a needle is inserted into the skin the body interprets it as an invasion, which activates the neurotransmitters to increase blood circulation. Through the release of endorphins, which are natural pain killers, the body can create its own healing medicine. Drummond said scientists have proven that inserting a needle shows up on an MRI of the brain. She said the science doesn’t matter to patients though. It just works, so they accept it.

The East and West

Wu has to work to incorporate his practice of ancient Chinese medicine into the practical paradigms of modern American culture, but said Western and Eastern medicine are highly complementary. In Chinese hospitals, there is a Western medicine wing for acute trauma care and an Eastern medicine wing for chronic degenerative diseases.
Western medicine is good for treating certain ailments and injuries after they manifest themselves in the body, Wu said. Eastern medicine is often better for preventing illness. In many Chinese villages, residents won’t go to acupuncturists to be cured for disease, but rather to maintain their health.
“Western medicine looks at the body like a machine,” Wu said. “Chinese medicine looks at the body like a garden, cultivating it, nurturing it and pulling unwanted things out before they become problems.”
Drummond said Chinese medicine addresses the whole person, and is not focused only on symptoms, but rather the big picture.
“The body, mind and spirit,” Drummond said. “It’s all tied in.”

Barbara Szeprethy is a receptionist for Marla Sweeney, another Bishop acupuncturist. She said her mother was a dentist before she became an acupuncturist. Szeprethy’s mother realized early on in dentistry that maintaining a person’s health is about looking at the entire body as a whole. Her mother thought only working inside the mouth was too limiting.
Szeprethy said when her mother was diagnosed with breast cancer she had to undergo a mastectomy. After surgery she refused radiation and chemotherapy and instead relied on acupuncture and herbal remedies to heal her body. Szeprethy said she has fully recovered and is now incredibly active.
Szeprethy said as a receptionist, she has seen many people benefit from acupuncture. Everyone benefits from it differently, but no one has reported any negative impacts or side effects.
“Big men will come in for the first time and say, ‘I don’t like needles,’” Szeprethy said. “Then they come back out completely relaxed.”

“Using Chinese medicine can sometimes save a person a lot of money,” Wu said. “It’s cheaper for someone to get acupuncture eight times for a backache than get an MRI at a hospital.”
Szeprethy said a lot of insurance companies are starting to cover acupuncture under certain policies. Companies are realizing that in order to lower the cost of health care for everyone, covering preventative medicine may make health care costs go down, she said.
After my own acupuncture session, I was skeptical of its effects. Immediately after my “floating” state, my back muscles were relaxed. Throughout the rest of the day, however, they began to hurt again. Wu told me I may not feel the full effects till the next morning.
When I woke up the next morning, my back pain was gone. Whether its disappearance was an effect of time or acupuncture, I may never know. What I do know, however, is that my experience beat any doctor’s visit.
Drummond’s visit produced similar results. I felt more relaxed than I’ve been in a long time. My mind had stopped racing. My body felt, well, in “balance.”
Both sessions beat any visit to the doctor. They made me realize how the most affordable form of health care is taking care of my own health so as not to have to pay to cure preventable ailments. Rather than worrying about balancing my checkbook, I should probably stress over balancing my energy instead.