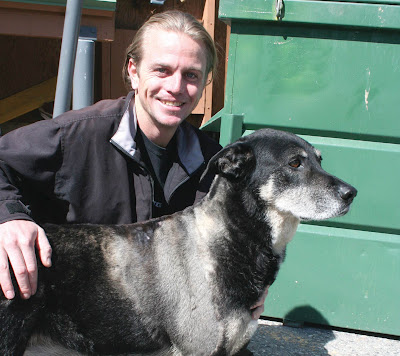 What dog wouldn’t want Doug Whalen for an owner?

What do you do when your dog is in a scrap with a bear and the bear is getting the best of it?
If you’re Mammoth Lakes resident Doug Whalen, you jump on the bear and save your dog’s life.
The incident occurred during the early morning hours of July 18.
Whalen, 29, is a 10-year resident of Mammoth Lakes and works at the Sierra Nevada Rodeway Inn.
He lives on the property in a small apartment which is located just steps away from two dumpsters.
On the night of the incident, Whalen returned home at about 1 a.m. and decided to take his dog out for a short walk before bed. His 8-year old Shepherd mix, Cink, shot out the door and started barking. Whalen, following his dog out the door, soon saw what all the commotion was about; a small, cinnamon-colored bear standing near the dumpster.
Whalen said the bear was probably there to rummage through the dumpster, overflowing from the recent construction project at the Inn. Whalen said the bear seemed docile, and after seeing Cink, it started to lumber away. The dog, however, charged after the bear, and probably in an effort to defend itself, the bear began swiping at the dog.
One heavy swipe on the dog’s back took the dog down to the ground.
“I heard the gnarliest yelp [from my dog] I’ve ever heard and I just jumped on the bear,” Whalen said. “Some instinct kicked in, the kind that parents would get to save their own kid.”
Whalen jumped on the bear’s back, leading with his knee. The bear, who was in mid-swipe, was knocked off-balance and fell one direction while Whalen fell to the other side.
After Whalen intervened the bear retreated. Whalen left the scene unscathed; his dog, still smarting, is expected to make a full recovery.
Cink’s injuries required close to 20 stitches and Whalen said he has had to deal with vet bills, but those are bills he is more than happy to pay. Whalen had great praise for Veterinarian Gaylon TeSlaa, who told Whalen that if he hadn’t defended his dog, another swipe would likely have killed Cink. Shortly after the incident, wildlife specialist Steve Searles made a visit to check on Cink’s condition.
“Steve was pretty astounded that I would jump on a bear,” Whalen said, especially since Searles describes Whalen as generally a very private and unassuming individual.
After seeing how badly Cink was injured, Searles told Whalen he didn’t think his dog would make it.
Fortunately, Searles has been proven wrong. Whalen said he took several days off work to take care of his dog and said slowly, Cink has been making a recovery. Just the other day, he said, Cink was able to go for his first swim since the fight.
Whalen said his best guess for why his dog provoked the attack was to defend the territory of their new home at the Rodeway. Perhaps the unfamiliar location and the unwanted presence of a large animal sparked his dog’s protective instincts.
Searles said to have a dog bark at a bear is fairly normal, but to have a bear attack a dog is extremely rare. In his 15 years of working with bears, Searles said he has only personally known three dogs that have been attacked by a bear.
“I wouldn’t encourage anybody to do what [Whalen] did,” Searles said. “But everybody did what they did to defend themselves. [Whalen] acted spontaneously and his dog is alive because of it.”