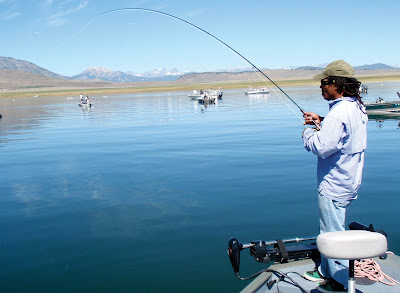 Rasta hooks yet another big one … (Photo: McKenna)

For awhile there, it seemed like every time I stumbled into one of those spots in town where people talk about fishing for trout — coffee and tackle shops, or anyplace you can buy fishing’s sudsy soulmate, beer — I kept hearing the same thing:
“Rasta’s been slayin’ em at the Lake. He’s practically been putting on a clinic at Crowley.”
Eventually I ran into Rasta, and with a very large smile and a happily nodding, dreadlock-covered head, he confirmed the rumors. Rasta, who works at Rick’s Sport Center, then offered to take me out on “the Lake,” as the fishing community calls Crowley (the largest reservoir on the LADWP aqueduct system). Seeing as how I can always use a clinic, fly-fishing, psychological or otherwise, I replied with the kind of calm demeanor my one-and-a-half year old kid displays whenever mom takes fresh-baked cookies out of the oven—I did a little dance and started squealing like a stuck pig.
After collecting myself, I remembered that I’ve known Rasta for years and have fished with him before, so I added: “I promise not to share any of your secrets or scream like a girl if I hang a real hog.”
Early the following morning, as the sun blasted its way above the White Mountains to the east and a cup of Bailey’s-infused coffee raced through my veins, I quietly hummed a Bob Marley classic as we made the 15 or so minute drive from Mammoth to the Lake.
“Rastaman vibrations, yeah. Positive! Live if you want to live. Rastaman vibrations, yeah. Positive! That’s what we’ve got to give!”
As we launched Rasta’s deep green, aluminum, 17’ fishing vessel from Crowley Lake Fish Camp, the water was calm and as glassy as Peter Tosh’s eyes when he sang “Legalize It.” Rasta set a swift course for McGee Bay.
By the time we arrived, almost 20 other boats were anchored around McGee Bay (all fly fishers as the Lake is now closed for the season to bait/lure fishing). Each boat had at least two people and several even had dogs—although none of the dogs appeared to be fly fishing, or playing cards for that matter. Massive pelicans the size of small pterodactyls and some float tubers also bobbed around.
Rasta picked a spot a bit away from the pack and boldly declared as he dropped anchor: “This is the spot. There’s some big fish waiting for us down there.”
With the engine cut, the quiet of the windless morning spread over the lake like smoke over the crowd at a Pato Banton show. Sporadically, the silence of the lake would be broken by small talk between fishermen, or the echo of anglers either exulting or swearing like truckers who just blew tires.
Rasta began casting while I rigged up my rod, and before I’d even tied on my first midge, he had a fish on. It turned out to be a about an 18” rainbow. It also turned out to be one of the smallest trout we caught that morning. For close to four hours, Rasta put on a still-water fly fishing clinic. While other boats came creeping closer and could only occasionally be heard calling out “Fish On,” it seemed like barely a moment went by without a trout getting hooked on our boat. Granted, Rasta did most of the hooking, but even I managed to fool a few fatties into eating my flies, including one chubby, feisty 21-inch rainbow. (For the record, I never squealed like a schoolgirl. I just giggled continuously like a stoner.)
So, as it turns out, the rumors are true: fishing on Crowley Lake with Rasta is not unlilke watching an adult film, except every once and a while you get to take part in the action.
“Fishing is fishing, you’ve just to know where they are and what they’re eating,” explained Rasta, who’s spent some time in his life working as front man for a reggae band that played with the world-renowned likes of this weekend’s Blue Sky Festival headliners, Toots and the Maytals. Rasta now works at Rick’s Sports and runs his own guide service called Bounty Fly.
It’s been a few days since I had some Rasta-man vibrations, and I’m still smiling like a kid who just got handed a warm from the oven cookie—or better yet, like an adult at a Pato Banton show who’s just been served a freshly-baked cookie.