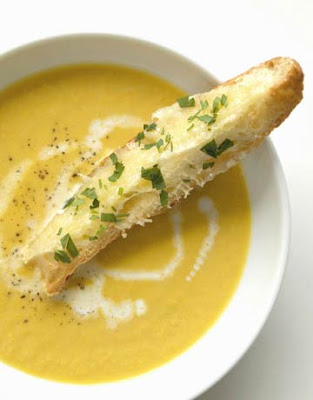 Split votes, like pea soup, can be healthy … add some croutons and creme fraiche and it’s all the tastier! (Photo courtesy DailyGreen.com)

Mono County residents, be glad you don’t live in Jefferson County, Alabama. By comparison, many California counties aren’t doing so bad when you consider Jefferson County could soon be the not-so-proud claimant of the biggest municipal bankruptcy in U.S. history. Among other financial woes, Jefferson is a stone’s throw away from defaulting on $40 billion in sewer bonds.
Mono County has no such problems … far from it, as the County is currently sitting on roughly $6 million in reserves. The County is, however, facing a $1.9 million revenue shortfall this coming fiscal year that will have to be dealt with. And, while the Board is hardly spending like a bunch of drunken sailors (a la the U.S. Congress), split votes and a slight backtracking on fiscal restraint were part of the scenery during Tuesday’s regular meeting.
For instance, the Board approved $10,000 in cost overruns at the Bridgeport Landfill Closure construction project, and while they understand delays happen, some Board members were vocally unhappy about being on the hook for the dough. Public Works Director Evan Nikirk explained the overruns came as a result of the project going from a 4-day to a 6-day schedule in hopes of finishing the job early, but that idea was sandbagged by a June filled with almost daily thunderstorm activity.
“So, they rolled the dice and lost and we’re paying for it,” groused Supervisor Hap Hazard, who also balked at the lack of notice for the agenda item during previous department updates. “This dates back to June … it’s 6 weeks old, and this is the first I’m hearing about it.” Nevertheless, the Board voted 5-0 to write the check.
Another increase passed more narrowly, the Board voting 3-2 to increase solid waste gate fees. Nikirk blamed the hike on cost of living increases and a 25% drop in the solid waste landfill stream, which he and the Board generally agreed was due to the sluggish economy, and downturns in construction and general business. Nikirk said the plan was to boost fees from $44/ton to $50/ton.
Kevin Brown of DNS Waste Removal vigorously spoke out against the increase. “[Costs] have gone up for us, and now you’re asking for a 13.7% raise. [Customers] are struggling as it is. You should ask the public if they’re okay with it. If they are, I’m for it, too,” Brown told the Board. “There have to be other ways. Some people on a budget can’t afford an additional $3.50 for service. They’ll cancel it and you’ll see more dumping out in the desert.” Brown asked for meetings in the various communities before agreeing to a fee hike.
“Have we looked at streamlining costs?” queried Supervisor Vikki Bauer. “We raised fees when the stream was up; now we’re raising them again when it’s not.” The economy will turn around, she said, and therefore trash output will turn around.
Board Chair Bill Reid firmly stated he thought it was an “inappropriate time” to raise fees. “It’s like a restaurant when not as many customers come in; you raise prices and cut portion sizes,” Reid opined. “Maybe it’s not a perfect analogy, but I’d favor using some reserves to cover costs until we have a better idea about where we are at as a County,” an idea that didn’t work for Supervisor Tom Farnetti.
“We’re already facing spending $2 million to balance the budget and cover a projected deficit,” Farnetti retorted. “Our rates overall are very reasonable and prices haven’t gone up in the past three years. The state hasn’t balanced its budget and will probably have to come up with another $7 or $8 billion next fiscal year.” Farnetti pushed for the increase, but suggested an Oct. 1 effective date to inform public and a date to revisit the issue not later than Feb. 1. Reid and Bauer dissented during the vote.
More spirited debate was on display when it came to revisiting proposed increases in fees for a myriad of County permits, such as remodeling of food facilities (which would go up a whopping 156%) and well capping, which Finance Director Brian Muir estimated would potentially bring in almost $129,000 in additional revenue.
Small increases didn’t seem to be the problem, but the hits to small business increases drew scrutiny. “We don’t raise fees on a regular basis. In a couple of years, we’re going to have to raise fees substantially,” commented Supervisor Byng Hunt. “If we’re simply trying to recover the cost of doing businesses, we have to ask ‘Are we doing business efficiently?’” Hunt said he wasn’t against raising fees in the short term, but added, “I don’t want this to become a regular policy of the Board.”
Reid said he was neither for nor against, but would rather defer any moves until the budgetary “lay of the land” is better known, including decisions coming from Sacramento and a resolution of the Mammoth Mountain Ski Area tax reassessment. Hunt suggested limiting annual increase, while Bauer pushed for freezing all restaurant and food-related increases. “It’s not a significant amount of money, but the heartburn we’re going to feel later could be incredible,” she said.
Farnetti was unable to be present for the vote, but conveyed via Reid his opposition to any fee increases at the present time. The Board voted 3-1 to approve the fee hikes, with the exception of certain line items (many of those food industry related) that will be under certain percentage caps or at least reduced in amount of increase. Without Farnetti, Reid’s was the lone dissenting vote.
Reid said he thought the split votes were actually a positive sign. “It’s a good thing … healthy dialogue,” Reid said, applauding what he called a “total lack of animosity” among Board members, even as they disagreed on the issues.

Crowley Lake resident Larry Payne was in Mono County Superior Court Wednesday, seeking a stay to block construction of a new water tank scheduled to be installed near his property. Payne recently lost an appeal hearing before the Mono Board of Supervisors over the issuance of a Use Permit to the Crowley Lake Mutual Water Company. Payne has questioned several aspects of the tank project, including grading height, view and the type of tank selected.
Payne has since filed three more appeals that will be heard in a proceeding later this month, but asked for the stay to halt any work on the tank, which he said “could go any day now,” until those appeals can be heard. Judge Ed Forstenzer previously had to recuse himself from the hearings process, and on Wednesday Judge Stan Eller said he was legally bound to do the same, handing the stay proceeding off to a traveling judge who will take up the case on Aug. 12 at 1 p.m.