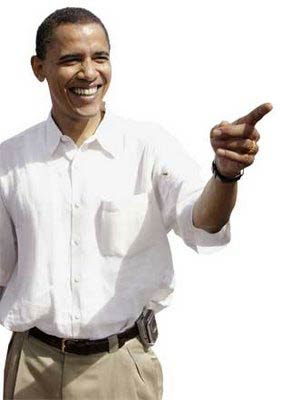 Change we can believe in? We’ll see, but maybe President Obama is on to something! (Internet photo.)

Apparently, our Mayor doesn’t want to be typecast.
A few weeks after we accused Mayor Neil McCarroll of McWaffling on the budget, the Mayor responded by taking firmer grip of the bully pulpit at Mammoth Town Council’s regular meeting on Wednesday.
First, there was the budget, which for the most part Council and Staff remained tight-lipped about following a three-hour closed session meeting on Monday.
McCarroll did promise, however, that by the first Council meeting in September, Town Manager Rob Clark will cut staff by a greater percentage (overall) than what MMSA did in January.
That would mean at least six positions.
Indeed, the proposed land sales to the County and Hospital District are on hold, which has left a $1.6 million hole in the 2009-2010 budget. In response, Council has directed Clark to make an additional $550,000 in cuts beyond the $624,000 it demanded Clark remove from the “working” 2009-2010 budget.
That $1 million replenishment to the REU (Reserve for Economic Uncertainty) Council kept promising all spring as a paean to its fiscal responsibility? Forget it.
But this was part of the undercard to the true bout of the evening, a bout which McCarroll helped carry by a 3-2 vote at 10:22 p.m.
The bout began innocuously enough. A document on the proposed incentive zoning/community benefits policy was brought forward for Council consideration for the umpteenth time.
And for the umpteenth time, Council seemed fully prepared to punt it. Councilmember Jo Bacon said it’s not enough to provide a list of potential community benefits in a particular district plan; you have to quantify it. What she implied is that if you aren’t totally clear on what you want, you have no idea what you might get.
“I think we’re micromanaging when we try to get too specific,” countered McCarroll.
A reluctance to micromanage is one thing, replied Councilmember Skip Harvey, but that shouldn’t prevent Council from giving some solid direction. “Let the Planning Commission decide between red and blue versus the entire color spectrum.”
McCarroll thought there was enough in the policy document to provide that direction. “Let’s leave the decisions to people who have a true interest in the topic. If we micromanage too much, what’s the point in having Commissions?” His belief is that Commissioners should be allowed to use their discretion, and Commission decisions are always subject to appeal. As a former Planning Commissioner, he feels the policy document gives Commissioners enough to work with.
Councilman John Eastman backed McCarroll.
Attorney Mark Carney, who represents Old Mammoth Place (formerly the Clearwater) said the policy allows for the hiring of a 3rd party consultant, paid for by the developer, who would analyze the financial value of any community benefits offered to determine whether or not the Town was getting a good deal.
This left Councilmember Wendy Sugimura as the swing vote. Initially, it looked as though she wished to continue the item and tie more specific numbers to the community benefits lists.
Carney said action on the policy was promised in May and that his client had specifically delayed submitting a use-permit application until the policy was finalized.
“My client had planned on submitting a use-permit application on August 20th. We would prefer you make the hard decision you were elected to make.”
At 10:20 p.m., ten minutes before the legally mandated end of the meeting, Sugimura made a motion which attempted to parse the differences. The motion was to approve the policy pending further discussion, presumably at a future date. The Mayor jumped all over it, abruptly ended Council discussion and immediately called for a vote. The motion passed 3-2.

Town Wildlife Specialist Steve Searles said that within the past thirty days, local bears have “done” (broken into) 45 kitchens. In a typical year, he said there are 4 to 5 home entries.
Searles estimates that one bear, named Blondie, has done thirty kitchens all by herself. A sow and two cubs have done 12, and he says three individual bears have broken into one home each.
Ironically, said Searles, a bear was breaking into the Eastman cabin on Sherwin Street as the meeting was getting underway.
The big issue is Blondie. Searles said he has asked the California Department of Fish and Game on several occasions for a depredation permit to put Blondie down in the interest of public safety, but thus far, has been denied.
“The Chief has been right there [with me] on this,” said Searles.
Police Chief Randy Schienle told Council that due to government policy, the only way a municipality can obtain a depredation permit on a bear is if a private citizen whose home has been broken into by a bear steps forward and makes such a request.
“There is a citizen who has stepped forward and we should be able to get that permit signed within the next few days,” said the Chief.
Mayor McCarroll acknowledged Thursday that he is that citizen.

Chief Schienle, getting out in front of the budget debate, gave a presentation on the current state of his department’s staffing, arguing that no cuts should be made.
Over the past 18 months, the MLPD has lost five employees due to attrition, the bulk being support personnel.
Currently, the MLPD is carrying 21 sworn and 2 non-sworn positions.
This staffing level, said Schienle, is comparable to many of our peer resorts and on an officer per 1,000 population basis, significantly below.
Schienle calculated the average local population based upon permanent population plus an estimation of daily commuting workforce plus average visitor population based upon room occupancy.
Nationally, Schienle said police departments average 2.3 officers per 1,000 inhabitants.
In the west, that number is 1.7 per 1,000.
In Mammoth, that number is 1.2 per 1,000.
Meanwhile, the MLPD produces 70% of the District Attorney’s
caseload and 80% of County arrests.
“The primary function of any government is to provide public safety for the citizens of that community,” emphasized Schienle’s final PowerPoint slide.
Town Manager Robert Clark is expected to reveal his suggested staffing cuts in September. Based upon union rules, last hired would be first fired according to police union protocol.