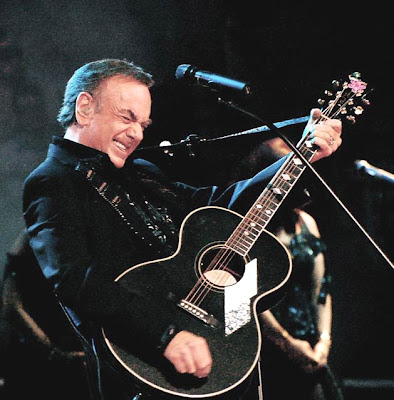 When a sextet of San Francisco musicians came together as Super Diamond 16 years ago, none of them had any clue that playing their own take on Neil Diamond songs would net a following that would not only allow them to quit their day jobs, but also keep them on the road for hundreds of gigs each year.
What’s even more improbable is that their act has put them onstage at renowned venues such as the Hollywood Bowl and on top TV shows such as “Late Night With David Letterman.” They’ve also earned a very special fan: Neil himself.
The band is an unusual tribute act, delivering, for lack of a better term, an “alternative Neil Diamond experience,” which can mean a Zeppelin riff dropped into “Brother Love’s Traveling Salvation Show” or a nod to Black Sabbath in “Holly Holy” … even a bit of AC/DC thrown in for good measure isn’t unheard of.
Since Super Diamond is headlining next weekend’s Mammoth Rocks festival, The Sheet threw on its office copy of “Hot August Night” and talked with lead vocalist Randy “Surreal Neil” Cordero.
The Sheet: Our publisher has a vivid memory that sticks with him of stopping on a San Francisco street and watching a girl in a car blasting “Sweet Caroline” on the stereo and belting it out at the top of her lungs. Is there a single moment or recollection that led you to what is now Super Diamond?
“Surreal Neil”: When I was a kid, I had an 8-track of “12 Greatest Hits.” Then he kind of fell out of fashion, but years later, I bought some CDs and rediscovered him. In the late 80s, I was doing original music, and threw in “Sweet Caroline” into my set, and it was just so different than what would come from me, I thought it would be fun. I got smiles when I started playing it. The nostalgia factor took over from there, but that’s really what started it off in the first place.
Sheet: An “alternative Neil Diamond experience?” Can you describe that?
“Surreal Neil”: “Alternative” is an interesting word … it is in the sense that it’s different. We do the show in our own style, based on the music we like, sort of how we would have done the songs if we were Neil. And it’s also “alternative” in that we use some alternative rock and other types of music in the arrangements, too. Van Halen, The Cure … all kinds of things.
Sheet: You played the Hollywood Bowl this summer. What was that like?
“Surreal Neil”: Huge, 17,000 people. We opened for “ABBA: The Music.”
Sheet: You’ve got fans up here already that are jonesing to see you. Ever been here before? Are we the highest-altitude place the band’s played?
“Surreal Neil”: Except maybe Aspen. Hope we don’t need oxygen!
Sheet: And Neil’s cool about it. Was he a mensch when you met him?
“Surreal Neil”: He was amazing, extremely nice, down to earth. He sang with us twice. First time he picked “I Am … I Said,” the second time he sang “Cherry, Cherry” and “Forever in Blue Jeans.” Those aren’t that different the way we do them. It was incredible … watching him work while we’re playing alongside him — the highlight of our career. My parents were sure proud!
Sheet: Rocker-era Neil, balladeer-era Neil … or both?
“Surreal Neil”: Both … we do rocker versions of his ballads. We play it all, including songs he wrote that many people don’t know he composed. “Red, Red, Wine,” Girl You’ll Be A Woman Soon,” “I’m a Believer” and “Heartlight.” There’s more distortion, reverb, the drums are hit a little harder, very much like Depeche Mode.
Sheet: Anything you want audiences to take away from the show?
“Surreal Neil”: Don’t ever let anyone tell you Neil doesn’t rock. We’re gonna show you he does — it’s our mission!”