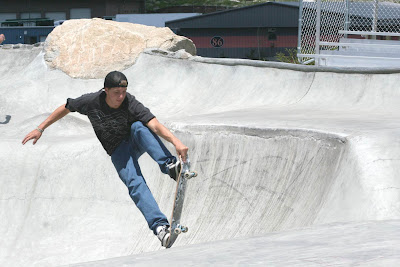 Insurance company puts down the kickstands

The Volcom Brothers Skatepark is back to being 100% skatepark.
Bikes were officially banned from the park as of Tuesday.
Actually, bikes were already banned from the park, but the Town’s announcement Tuesday means it will enforce the ban.
Mammoth Lakes Police will enforce the ban through random patrols of the park.
Mammoth Lakes Tourism and Recreation Commissioner Tony Colasardo said this week that “the decision was made by the insurance company.”
The Commission had been exploring the idea of creating set park hours for the different user groups.
The idea, however, was quashed when the insurance company was informed that the architect specifically designed the park as a skatepark.
Which meant that any bike accident in the park had the potential to become a legal liability.
An incident last weekend where a skater was hit by a bicycle may have added fuel to the fire.
Both Colasardo and Baer said the park, in some ways, has become a victim of its own success. It’s the increased volume of use which has led, correspondingly, to increased conflict.
Baer said she has visited the park on several occasions in recent weeks just to observe what’s going on. In her estimation, everything’s just fine 85% of the time. 10% of the time, it gets a little sketchy, and 5% of the time, it’s downright dangerous.
Baer has not been supportive of bikes in the park. She doesn’t believe they are a compatible use. Not all facilities can be multi-use, she added, citing the community tennis courts as an exampe.
At the same time, Baer is sympathetic to any user group which is shut out. To that end, she hopes to spearhead at least ine fundraiser with the idea of raising money for a future bike/skate park, perhaps to be located in Crowley.
That event will take place on Sept. 11 from 3-6 p.m. It is the “JLA Putting Championship” at Sierra Star. $25 per person. Food, fun and laughter. Contact Jane for more information at 920.1137.