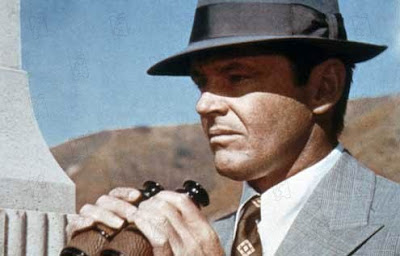 Jake Gittes (Jack Nicholson) upon figuring out he’s been bested by Lunch in the search for Jerry Preston. Lunch’s secret … let your fingers do the walking. It’s just that easy! (Photo: Paramount Pictures)

Jake Gittes, eat your heart out.
When it comes to locating missing persons, what a typical taxeater can’t locate in a month, Lunch can locate in a matter of seconds.
I’m referring, of course, to Sierra Center mall owner Jerry Preston.
You see, last month, Mammoth Lakes Town Council asked Staff to look into lease/sale options for commercial space in the Sierra Center as part of fulfilling its due diligence before Council agreed to sign a 12-year lease extension at the Minaret Mall (where its offices are currently located).
Council just wanted to be sure that it was getting the best possible deal.
The lease extension was brought back before Council at its regular meeting Wednesday night.
Staff said it had been in communication with the County about using combined leverage to perhaps sway Mr. Preston into lowering his asking price and doing a deal.
However, Staff had chosen not to call Mr. Preston directly, and in the agenda packet for Wednesday’s meeting, Human Resources Manager Michael Grossblatt wrote, “[Mono County CAO David] Mr. Wilbrecht also indicated that Mr. [Jerry] Preston, the Sierra Center Mall owner, was not returning calls made by the County. In follow ups with the County over the past month, this situation has not changed … ”
Grossblatt told The Sheet Wednesday that he had spoken to Matthew Lehman in late July. Lehman serves as Preston’s leasing agent for the Sierra Center. Grossblatt said he and Lehman left the meeting with the understanding that Lehman would speak to Preston and get back to Grossblatt if there was any significant progress to report.
There was apparently no signifcant progress to report.
But still, no one had called Preston. So just for kicks, I gave him a call, just to see how impossible he was to reach.
He answered on the first ring.
Sheet: Has anyone from the Town tried to contact you within the past month?
Preston: Nobody’s tried to call me … and I always pick up my phone.”
Preston went on to say that everything’s negotiable, “and with the market the way it is right now, they [the Town] could probably sign a pretty good deal.”
Now Preston did say he was still looking for about a $2/square foot gross (rent plus common area) number, which is significantly higher than the proposed deal with the Minaret Mall, which starts at 60 cents/square foot plus common area (which last year ran .48/foot). But that’s not the point. The point is that Council routinely gives direction which Staff seems to follow or not follow depending upon its whim.
Grossblatt said he interpreted last month’s Council direction to mean that the Town was supposed to sit back and give the County more time to pursue an agreement with Preston. The Sheet interpreted Council direction as “Go talk to Preston.” I guess I’ll have to bug Town Clerk Anita Hatter for an audio transcript.
Grossblatt does believe he covered his bases and that his conversation with Lehman is equivalent to speaking with Preston directly.
As Grossblatt asked rhetorically in parting, “Whose responsibility [Preston’s or the Town’s] is it to make the first move?”

No move was made on the Minaret Mall lease extension Wednesday night. Why? Because the Town has no sublease agreement with the County, which rents 7,000-square feet above Giovanni’s which houses members of its health and planning departments.
Well, actually, Grossblatt and Finance Director Brad Koehn claim there is a sublease agreement; it’s just that no one can actually find it.
So, barring an actual contract, the County’s on a month-to-month lease.
If the County decided to break the lease and move elsewhere, the Town would have two options. 1.) Find another tenant, or 2.) Pay the landlord a 15% penalty (immediately tacked on to the rental rate of the remaining 16,000 square feet) in order to forfeit the space.
Councilmember Skip Harvey opined that to sign a 12-year agreement without a firm commitment from the County would be irresponsible, especially because the current .60/foot rent is scheduled to increase significantly (to .88/foot) within 30 months.
“I don’t think we should count on them [the County] being there long-term … and we’re not in the business of being landlords.”
Harvey believes the Town should simply sign its own deal based upon the 16,000 square feet it actually uses and that the County should negotiate its own deal.
“We’re good tenants. We’ve earned it,” he said.
A spokesman for the landlord countered that the rate being offered is predicated upon the Town committing to the entire 23,000 square feet.
Councilmember Wendy Sugimura advocated signing the lease and working out the details with the County later.
Mayor Neil McCarroll said the absence of a certifiable sublease agreement is “embarrassing,” and that he couldn’t support the lease extension without a sublease in place. “I would never advise a client to do that.”
The landlord’s spokesman urged the deal get done that night, claiming that under the current proposal, the Town would have a lower lease rate 12 years from now right where it is than it could pay today across the street at the Sierra Center.
He also said it would be costly and time-consuming to move.
*Yeah, because I’m sure they’d all take a furlough day to contract out the move to somebody else.
Mammoth Lakes resident Marshall Minobe wonders why the Town is so eager to agree to a lease which calls for a 46.7% rate hike within 30 months time, especially when the Consumer Price Index is negative over the past twelve months.
As he wrote in an email Thursday following the Council meeting:
“Regarding commercial space market rates, you and the Town’s negotiator should understand that we are our own sole comp. It was acknowledged last night by all that the Town is a very large tenant, and one that is committed to the long-term, very stable and very reliable. These qualities are very valuable to the owner. Indeed, the representative present seemed,quite anxious to get the deal done. Given this, I submit to you that there has been inadequate justification presented for a jump to $0.88 after 30 months or any of the other terms.”
Under the initial agreement, after the bump at 30 months, the rent would be increased at 5% per year for the remainder of the contract.
An adjustment to the contract presented Wednesday would have a floor/cap arrangement in regards to rent increases which generally follow the CPI (Consumer Price Index).
Rent increases would have a floor of 3% and a cap at 7% and otherwise follow the CPI.
Council directed Staff to negotiate a sublease with the County and to come back to Council no later than the next regular meeting scheduled for Sept. 2.

Council did vote to approve an agreement with Turner Propane regarding extension and maintenance of Sherwin Creek Rd.
Turner Propane needs the road extension to serve its planned propane tank farm, which will be situated at the old gravel pit (motocross parking lot).
The propane tank farm will ensure the Town has an adequate propane supply in the event of a sustained winter storm.
As the Town staff report said, “the propane fram will ultimately provide the Town with a four-to-six day supply of propane during winter storm cycles if road closures are prevalent.”
Thom Heller of the Mammoth Lakes Fire Department added that not running out of propane is, well, a key component of a positive guest experience and critical to public safety.
A side benefit of extending the road and plowing it during the winter months is that it opens up increased recreational opportunities. As Mayor McCarroll noted, “We are in the business of providing amenities to our guests.”
Of course, amenities often come with costs, and the Town will be responsible for plowing and maintenance. Not a hard cost, per se, but it will require time and resources.
Time and resources most dog owners, dismayed by the draconian leash laws instituted by the Forest Service at Shady Rest, will consider well spent.

So the proposed revision to Devil’s Postpile fees is apparently this: Instead of charging $7 per person riding in a particular vehicle, they’d like to charge $10/car. Which disincentives driving alone, but may also disincentivize riding the bus. Hmm.
Local writer David Page has a story in this month’s Men’s Journal which features Mammoth local Bill Altaffer.
Altaffer, once celebrated as the “World’s Most Traveled Man,” has now apparently relinquished that official title to a pansy-ass rich guy who looks a little too much like former Presidential candidate John Edwards and who apparently is less of a true traveler and more of a lander and take-offer.
Anyway, look for a copy of the issue at the Booky joint in Mammoth or at Spellbinder Books in Bishop.