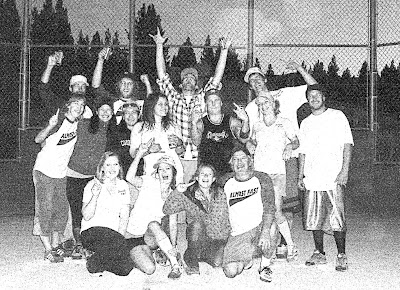 “Almost Fast” just completed a perfect season of co-ed softball. No wins. In addition to a lack of athletic talent, apparently no one on the team can operate a camera either. (Photo by Anonymous … go figure!)

And no, Harold’s not referring to the Raider offense

Editor’s note: We’re going to save Harold’s season predictions until next week, because we discovered some mathemtical inconsistencies in his prognostication of various team performances. With a total of 512 regular season NFL games, one would imagine that there would be 256 winners. In Harold’s world, however, his predictions computed to a 236-276 league record. In other words, he hates every other team besides the Steelers so much that he can’t think straight.
And yes, he has the Steelers at 12-4 and winning the Super Bowl again.

So Minnesota QB Brett Favre didn’t come to mini camp or training camp. The only camp he attended was RV camp. Because he has “pull with the coaches” he is apparently successful at getting the team out of practices early. I guess he doesn’t need to practice any more than Allen Iverson, even though he’s with a brand new team team. The Vikes organization is a joke and Favre will get Coach Brad Childress fired. If you are a Vikings fan, you might as well start shopping for L.A. Clipper apparel online.
New Cleveland Coac Eric Mangini, a discipe of Bill Belichickenhead, thinks he’s being brilliant by not naming a starting QB yet. Wow. he is fooling everyone. As if opposing coaches are losing sleep over whether to prepare for Brady Quinn or Derek Anderson. Will we beat the Browns 30-13 or 37-6?

Keep these tips in mind for draft day.
1. If you decide to wait to draft a second RB ‘cause you think you got a steal in Bear RB Cedric Benson, please join my league. We will love you. You are a Donator. Your $100 will be greatly appreciated when my Xmas bills come in.
2. If you draft Jet QB Mark Sanchez or Raven QB Joe Flacco, you are going to lose. I would call you a dumbass or a moron, but the people in your league should have done that by now. If they haven’t, please have your league all join my league.
3. Draft Bill WR Terrell Owens and Bill QB Trent Edwards in tandem. That way, when Buffalo gets shutout 5 times times this fall, you CAN SCORE NO POINTS. DUMBASS.
4. Do not draft Kurt Warner. They say he has a bad hip. A bad hip? That’s what grandfathers have.
5. Steeler QB Ben Roethlisberger is not a fantasy QB. If you draft him, you will be sorry. I was last year.
6. L.T. stands for Lost Talent. He is done. Do yourself a favor and draft someone else. If you have L.T., trade him today, but not for Cedric Benson.
7. If at anytime this season you set your lineup and you are starting a rookie QB, just tell your wife you want to spend some quality time. Enjoy a day at Macy’s shopping. Before leaving the house take a $100 bill and use it as toilet paper and flush it. That is what you did with your league entry fee.
8. Draft drunk. If you don’t drink, rent a monkey and let him throw s%$# at the draft board to make your picks.
9. If you look at your roster the morning after and feel like you did after waking up after 15 shots of tequila and don’t recognize the coyote sleeping next to you that you thought was a fox the night before, do not fret. You will probably be one of the people who makes 12 free agent pickups the first 2 weeks. You shouldn’t even draft. You should go to the draft and eat the free food, drink the drinks and pick a couple of players. Then the next day just pick up free agents. What’s the difference?
10. When you hear the word DRAFT if the first thing you think of is “Bud Light or Sam Adams,” you should put your wallet back in your pocket and go home. Or to the bar. Spend your money on something you will remember. I mean enjoy.

Funniest s%$# I have heard in years. There was a guy that wanted to get away from his wife so bad he committed a bank robbery to do it. Seriously. He wanted a divorce but his wife said “she would kill herself if he did that.” He was so distraught at the thought of being with her anymore, he bought a BB gun. Yes, I said BB gun. Then he went to the bank. He approached the teller and said he would rob her … with a BB gun. Now she should have laughed and said, “Son’t break the skin with that high-powered weapon,” but he was not discouraged. He then asked the teller to call the police. He waited and even inquired with the teller as to the status of the police’s arrival.
Question: How do you get from LOVE SO STRONG that you are standing in a hot sweaty church with a funky used Tuxedo on in front of a bunch of people you don’t like (her family and yours) saying, “I promise to love you … in sickness and in health … ‘til death do us part” to “I would rather go to prison and get raped by a man named Butch than spend another minute with you?” How does that happen?? My wife has pissed me off plenty of times and moved me to Seattle, the worst place in America (besides Detroit) but I HAVE NEVER thought of going to jail to get away from her. Maybe to a titty bar, but prison?
Finally, we are in the worst recession the country has had in decades and what do you think teachers are doing in Kent, Washington? They are on strike. That is why I hate unions. If those mothers worked for a company, the only strike they’d be on is a hunger strike, ‘cause they’d be out of work. Kent is like the hillbilly part of Seattle. If you have a mullet joke, Kent is in it. And they are on strike. What, they need more mullet training? More auto shop classes to keep their 1980 Camaros on the road? Maybe someone should sue the teachers. You want to make more money? Get another job. I love education, but you know going in what you will make. Strike? In this economy? Wow!