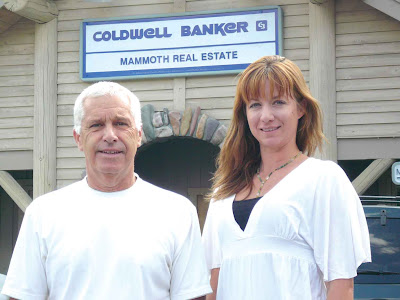 Bret Bihler and Lauren Tracey will run the Mammoth Rock Race this weekend in honor of the late George Fowler. (Photo: Geisel)

George Fowler, who founded Coldwell Banker Mammoth Real Estate, was an athlete at heart. Cycling, swimming, triathlons, tennis … he was everywhere … including the annual Ned’s Mammoth Rock Race.
Following his passing from brain cancer earlier this year, naturally the athletic community carried on. This year two CBMRE staff — Lauren Tracey and Bret Bihler — decided to keep him in the annual Labor Day weekend race, if in spirit only, by running it in his memory.
The race, organized by the High Sierra Striders running club, is a 10 km road and trail run with steep climbs and varying terrain.
“Between the trail and little passing room, you have to keep your wits about you,” said Bihler, who’s getting in shape for the Marine Corps Marathon in Washington, D.C., on Oct. 25. “I just want to beat my time from two years ago,” Tracey said, adding her concerns about smoke in the air from the nearby Yosemite fires. “I’m also doing a shoe change when we switch from trails to road.”
“Lauren and Brett are carrying on the part George was most proud of … his community involvement,” said CBMRE VP and Broker Linda Pasley.
The race starts this Monday, Sept. 7, at 8 a.m. in Mammoth Creek Park.

Beware gentlemen. Your mothers are always ready to brag about your accomlishments, especially to the local paper.
Gaele Eisert’s son Brendan Cushen was recently honored along with six other writers for an essay submitted during last summer’s “Your Land, Your Wildlife, Your Stories” competition sponsored by Defenders of Wildlife. Cushen, a University of Oregon sociology student, won for best fishing. The text is as follows:
“Fly fishing the upper reaches of the emerald green McKenzie River in the Willamette National Forest is never a let down, no matter how productive or unproductive the fishing is. Lush greenery hugs the banks of this mystical river as it flows through the dense coastal forests of the Cascade Range.
Having camped out the night before, I was on the river at first light. I spent 20 minutes drinking instant coffee in the foggy morning haze and sitting on the bank scoping the bugs to see what was hatching. I waded out and made my first couple casts. Standing waist-deep in greenish blue rolling water, I heard an osprey screech, and I glanced towards the tree tops. That’s when I spotted the source of all the ruckus. It was a bald eagle and an osprey in the middle of a battle of the birds.After swooping and diving at one another, and occasionally dunking themselves in the chilly morning water, the osprey flew upriver and accepted defeat. The bald eagle flew straight over my head, making a long swooping turn, and landed on a dead tree limb across the river. This massive skeleton of a tree stood only a couple hundred feet from my perch in the river. This was a postcard scene to say the least.
After picking my lower jaw up out of the river, I sat and watched this magical bird clean itself and dry off for a few minutes before gliding gracefully down river. Ecstatic with the raw display of beauty and nature I had just witnessed, I proceeded to catch and release a few native red side rainbow trout and considered the morning unforgettable. My love for this river and its wildlife was forever affirmed on that morning, and I hope this area can sustain its pristine and natural state for decades to come. Thank you, Oregon!”

Devils Postpile National Monument will turn 100 years old in 2011. The public is invited to help plan its future for the next 15-20 years during a pair of open house meetings Sept. 9-10.
During the open houses, the public can meet the planning team, learn more about the GMP planning process, and share ideas, concerns and thoughts about the unique monument. Meeting schedule:
Wednesday, Sept 9, from 6–8 p.m. in the Town of Mammoth Lakes Council Chambers in Suite Z, 437 Old Mammoth Road, in the Minaret Village Shopping Center (Vons), 2nd floor.
Thursday, Sept 10, from 11 a.m.–2 p.m. in the Mammoth Lakes Library Conference Room, 400 Sierra Park Road.
Info: Superintendent Deanna Dulen, 760.924.5505. Submit comments to http://parkplanning.nps.gov/depo.