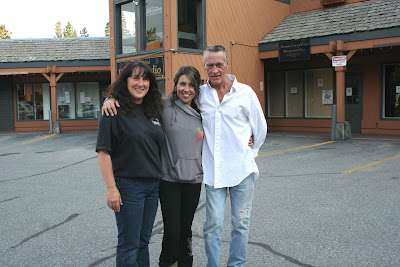 If you were worried about the possibility of there being no theater or dance in Mammoth once Shira Dubrovner resigned from the Mammoth Lakes Arts Center, worry no more. Mammoth’s now holding a pair of each and seeking full houses.
Dubrovner has taken her gig across town, forming the Mammoth Lakes Repertory Theatre and moving into the old Learning Express space in the Mammoth Luxury Outlet Mall.
In the space next to hers will be Le Centre, a new dance and movement studio.

Le Centre will open for classes on Monday, Sept. 14. The studio is located in the Mammoth Luxury Outlet mall and is also flanked by Van Heusen.
Partnering in the studio will be Sabrina Nioche, Paula Padilla and Dennis Wayne.
Nioche formerly danced with the Marin Ballet, Padilla was a former Songleader at USC and Dennis Wayne is a world-renowned dancer who has performed with the Joffrey Ballet and the Harkness Ballet and owned his own dance company in New York City.
Le Centre will be created andf managed by dancers. The idea, says Nioche, is to be able to take a four-year old and ultimately prepare him/her for auditions, may it be for a major dance company or a college dance program./
All the principals seek to build upon the momentum for dance started this spring when Wayne moved to Mammoth.
Partnering in this endeavor will be Snowcreek Athletic Club, which will refer dance inquiries to Le Centre. Snowcreek will maintain its current tumbling program.
“Combining the dance programs will benefit the students and the community,” said Snowcreek Owner Connie Black. “We are all excited about this shared opportunity.”
Snowcreek members will receive special rates. In addition, Le Centre will host its larger recitals and programs at the Athletic Club.
Nioche said she is eager to help pass on the tradition of which Wayne is a part.
“Dennis is a piece of living dance history. In his field, he is every bit the star that Deena Kastor is in hers,” said Nioche.
Meanwhile, Padilla has built a strong following with her hip-hop classes. If you were lucky, you caught the hip-hop performances by her young troupe The Firing Squad over the course of the 4th of July weekend.
Mall owner Kathleen Rudder said, “I look forward to the studio becoming a major cultural and educational outlet for Mammoth Lakes for every age and style which is available and affordable to all.”

After leaving the MLAC in June, Dubrovner produced the highly acclaimed, first annual Black Box Theatre Festival this summer.
Her fall season kicks off with The Marc Atkinson Trio musical concert on Thursday, Sept. 17, preceded by a special reception.
Marc Atkinson is Canada’s JUNO-nominated, Western Canadian award-winning musician and the leader of the internationally renowned Marc Atkinson Trio. The Trio, formed in 2000, has toured North America, England and Europe and receives standing ovations everywhere they perform – from the Montreal Jazz Festival to the Vancouver International Folk Festival to DjangoFest Northwest.
Atkinson is a multi-instrumentalist/composer/arranger/producer. His catchy compositions, found on the self-titled CDs I, II, III and now IV take guitar beyond the usual repertoire and sound. The tunes have a fiery but elegant guitar style, infused with a catchy blend of influences. All this while still maintaining the laidback humor and casual ‘good time feel’ of Canada’s West Coast. The music of the Marc Atkinson Trio good-naturedly welcomes all listeners aboard for an intriguing, exhilarating and unforgettable ride.
Dubrovner is also excited about her new location that is centrally located and more accessible to tourists and locals alike. The design calls for an intimate 100-seat theatre.
Her first main stage production opens at the end of October with “The Diary of Anne Frank.”
Dubrovner is also pleased to announce that Sister is coming back to town. Yes, by popular demand, Dubrovner is bringing back the Christmas Show version of Late Nite Catechism and an encore production of “Always Patsy Cline,” at a future date TBA.
Spring will blossom with Dubrovner’s favorite musical, “Fiddler on the Roof.”
Dubrovner is pleased with her new company and the tightly knit group of members. “We are a strong committee of people who have always loved and supported the Arts and understand what it takes to make an Arts organization thrive. Claire Roy will be House Manager and manage our Marketing, Kathleen Rudder will be Fundraising Chair, and Janice Brown will be Head of Catering and Concessions.
Dubrovner is extremely grateful for the support she has received and continues to receive from the community and pledges to continue bringing professional quality theatre to Mammoth Lakes for years to come. “The opening of Le Centre next door to the theatre is proof that the community of Mammoth is experiencing growth as a culturally supportive community,” she added. For tickets/information, call 760.709.1981