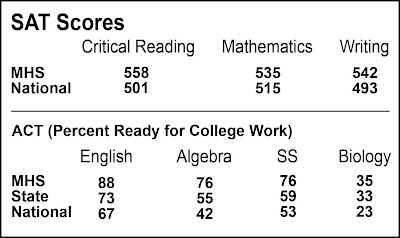 Two weeks ago, our friends at the Fifty Center ran a front page story titled “Mammoth Test Scores Top Nation.”
Wow, I thought to myself, how could they have scooped us on such a big story? Tops in the nation?
I looked to see who had scooped me on the story. Uh oh. The story had been written by one of the Fifty’s veteran reporters, Mammoth High School Principal Mike Agnitch.
According to the story, Newsweek Magazine selects top U.S. high schools every year based on the number of students who take Advanced Placement exams.
“This year,” wrote Agnitch, “99 AP exams were given … and we had 65 students in our graduating class. The resulting ratio of 1.52 [exams taken per senior] easily qualifies Mammoth to be listed by Newsweek as one of the “Top U.S. High Schools.”
Hmm. You can be a top high school just based upon taking tests. This seemed a bit absurd. Why would MMSA CEO Rusty Gregory and his wife Bonnie recently decide to pour $250,000 of their own money into a high school which Rusty described just last week as having an “acute need” and being in an “emergency situation?”
So I did a little research. On a positive note, there’s a lot of good stuff to report. At the same time, Mammoth High School’s got a ways to go before ‘Mammoth,’ ‘top’ and ‘nation’ should appear in the same headline.
Despite qualifying for consideration as a top high school, Mammoth didn’t appear in Newsweek’s top 1,500.
But first, the good news.
On both the SAT and ACT college preparatory tests, Mammoth High Schoolers outpaced both State and National averages by significant margins. See graph below.
Of those Advanced Placement exams taken last year, MHS students sported an overall 65% pass rate (a score of 3 or above on a 1-5 scale).
The national pass rate average on such tests is 60%.
That 17 of 17 students passed the A.P. Biology exam should come as no surprise, as M.H.S. Biology teacher Cheryl Hart has always set the bar high. Mammoth’s STAR (Standardized Testing and Reporting) test results in biology far exceeded the state average when they were last reported in 2008.
As newspaper reporter/Mammoth High School Principal Mike Agnitch said Thursday, “When we conduct our exit surveys for graduating seniors, Cheryl Hart’s name consistently pops up [as a teacher that sticks in student’s minds as a real difference maker].”
Other teachers who’ve garnered accolades are U.S. History/American Government teacher Erin LeFrancois and English teacher Chris Cooper.
As for areas needing improvement, an informal poll of both parents and recent graduates indicated that the high school has issues regarding overall teaching consistency.
“I’d like to see further improvement in math,” said Agnitch, who’s encouraged by the return of Deirdre Buchholz after a two-year hiatus. “She walks on water, from what the students tell me.”
“Rusty thinks it’s in crisis mode now? It’s been that way for years. The high school needs more departmental focus and better leadership,” said parent Claire Roy, who pushed for a breakdown of the A.P. results. A small sample of students taking and passing a lot of tests can create a misleading picture.
“It’s a horrible way to rank schools [basing a ranking on tests taken versus passed],” acknowledged former MHS English teacher Kirk Stapp. “The numbers can be easily manipulated.” That said, Stapp added, “The A.P. test is a valid indication of what a teacher’s doing in class. If those [pass] numbers are correct, that’s a strong senior class.”
Overall, however, Mammoth’s same school rank (a comparison of Mammoth and other California schools which share demographic similarities) is woeful. In both 2007 and 2008, Mammoth ranked in the 2nd decile (in the bottom 20% of its peer schools). Among all schools in the state, Mammoth ranks in the 6th decile (slightly better than average).
Folding the charter school into the high school will help Mammoth’s overall stats, as last year, the 11 charter kids had an average API (Academic Performance Index) of 847 compared to Mammoth High School’s school average of 727.
The difference in performance on standardized tests between Mammoth High’s caucasian and hispanic populations is about 150 points, but Superintendent Frank Romero is encouraged that this testing gap is being systematically narrowed at the elementary school level, boding well for the future.

Speaking of the high school, it did cancel its football season this year after all because it couldn’t recruit enough academically eligible kids to field a team. The emails and phone calls came in fast and furious on this one. People are upset, particularly after getting lured to a $50/plate fundraiser to “Intercept the Deficit” and support the program.
“Is it a bigger problem,” wrote Scott Fisher, ”than originally seemed, to have FIVE schools in this small town, with three of them not being able to participate in MUSD activities? Surely exceptions can be processed (and quickly).”
Mammoth Lakes Academy student Sara Somers makes a similar point in her letter to the editor which appears on pages 4-5.
If you were interested in following whether or not Jose Cortez could break the national record for career kickoff returns for touchdowns, do not fret. According to McKenna, he’s transferring to Bishop in order to give himself a chance to play.