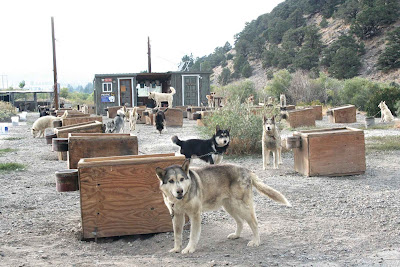 Or worse, he fears, NOT in the dog house

Jim Ouimet of Mammoth Dog Teams is in crisis.
After six years of running his dogsled operation out of the former Mono County Sheriff’s Substation located about a mile south of the Hwy. 203 interchange off U.S. 395, he may soon have to move.
Back in 2003, Ouimet’s operation (which includes 38 dogs) was displaced from the industrial park (located across the street from the airport). Mono County came to the rescue and ultimately negotiated a five-year lease with Ouimet for use of the substation and adjacent property.
He describes it as the perfect location for his business.
That lease expired in 2008. When Ouimet pressured to get a lease extension done, he says he was told by a member of the County Planning Dept. that he should just keep paying his rent and that everything would ultimately be worked out.
This County employee, however, may not have been entirely familiar with the terms of the initial agreement. Nor, apparently, is Ouimet.
According to Mono County Counsel Marshall Rudolph, the statute the County must operate under for this particular lease carries restrictions in regards to length as well as rent. By law, the lease is non-renewable; it has to go out for bid every five years.
During the original process, Ouimet was the only applicant, but Rudolph said, in fairness, that other potential parties should have the opportunity to apply.
As County Administrative Officer (CAO) David Wilbrecht described the business as “an asset to the Town, community and ski area,” but noted that the County, while sympathetic to the uncertainty of Ouimet’s position, is encumbered by its own legal constraints.
The Mono County Board of Supervisors is scheduled to address the substation lease this upcoming week during the afternoon session of its Tuesday Board meeting.
For his part, Ouimet feels he has been a good tenant, cleaned up the property, and has discouraged vandalism of County property (often stored or parked on-site) by his mere presence.
The County did take issue with Ouimet’s taking up permanent residence at the substation, which violated terms of his lease. Ouimet acknowledges that he and an employee were living on-site, and also says the residency issue is something he’d like to see addressed in any future lease.
“You’ve got to have someone on-site. If you don’t, and a dog gets loose, you’re either gonna have a dead dog (the loose dog will use the opportunity to attack a rival) or a pregnant dog.”
The uncertainty of the situation definitely has Ouimet feeling, well, unsettled, and an emergency County inspection on July 28 (followed by a subsequent lockup of the building on August 7) has done little to assuage his fears.
“I don’t want a fight,” he said this week. “I‘m just concerned about my dogs and my health (Ouimet had major shoulder surgery in July).”
Ouimet hopes that the County will ultimately see fit to extend him a new lease, in part because of the value they see in maintaining a unique amenity for locals and visitors alike.