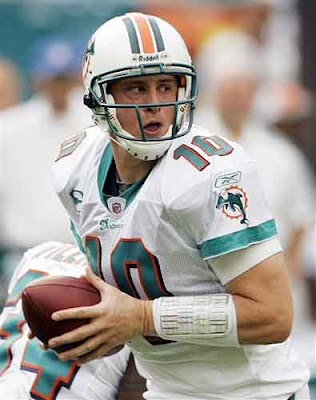 Fortunately, Albert Haynesworth does not

The NFL Season is upon us. The world is full of possibilities. Everyone’s team is undefeated and has a chance to win the Super Bowl … in theory. Everyone loves their draft picks, trades and free agent pickups. To wit: Some dumbass fan somewhere is saying TJ Houshmandzadeh just made us a Super Bowl contender. Some complete mental midget is saying Denver QB Kyle Orton will thrive in the team’s great, new offensive scheme. And they are all wrong. And this weekend, it will all come to light. By halftime your team is down 21-0 and you are already booing. Reality sucks … and the Pittsburgh Steelers are again the class of the league. The rest of the teams? Class clowns. The picks:

Pittsburgh 14-2. Coach Mike Tomlin is still hungry. New additions Mendenhall and Sweed will be future stars. WR Santonio Holmes has learned to catch with no thumbs. And that defense. Ooohhh that defense. I smell repeat.
Baltimore 9-7. And that is being generous. They got lucky last year and had no WRs. This year they still have no WRs AND their best WR is another year older. QB Joe Flacco is a bum and more overrated than Angelina Jolie. The defense lost Bart Scott and its coordinator.
Cincinnati 8-8. This team is a mess, full of headcases, so what did they do? Draft another one, Andre Smith, who left the scouting combine early without working out, and then later held a private workout where he looked like Rerun from What’s Happening running the 40 while he jiggled like Jello pudding. Then he holds out for a big contract, finally comes to practice for 3 days and breaks his foot.
Cleveland 7-9. QB Brady Quinn can lift weights, but he is a marginal QB. Their starting RB is Jamal Lewis and they have Braylon Edwards at WR. If Santonio Holmes has no thumbs, then Braylon is missing a hand.

New England 12-4. Everyone is picking the Pats to win the Super Bowl ‘cause QB Tom Brady is back. When was the last Super Bowl they won?? Yeah, thought so.
Miami 9-7. The luck runs out this year. Still lacking big-time talent. A team full of Bill Parcells guys is good for a couple of years. Then it blows up.
Buffalo 8-8. I know people think WR Terrell Owens will make this team a winner, but how is that possible when QB Trent Edwards can’t complete a pass longer than 7 yards?
Jets 6-10. This team isn’t very good and Buddy’s Ryan’s dumbass son, new Coach Rex, is a sideshow.

I should skip this division since they should be demoted to the PAC 10 in the NCAA. But some sorry team gets a playoff berth anyway.
San Diego 9-7. This team is on the downside and Norv Turner is one of the worst coaches in history. L.T. is showing signs of becoming Shaun Alexander.
Denver 6-10. Given the division they’re in, they can muddle through 6 wins but they won’t be competitive. Their QB is a bum. Kyle Orton has no right starting for any team. What, was Tommy Maddox unavailable?
Kansas City 4-12. The 1st year head coach has fired the offensive coordinator, so the head coach will serve as head coach, offensive coordinator and QBs coach. So he will have plenty of time to coach the team, right?
Oakland 0-16. 1st round pick, WR Darrius Heyward Beywatch, will be a BUST. A bigger bust than Dolly Parton’s Z cups.

Indy 11-5. They won’t be as good, but the division is overrated so they will win it. Make no mistake, QB Peyton Manning is the coach of this team. The defense wasn’t great when Tony Dungy was there, RB Joseph Addai is injury prone, and Safety Bob Sanders plays a quarter of each season. They aren’t a factor in the playoffs.
Tennessee 10-6. They overachieved last year, and their defensive anchor. Albert Haynesworth, fled to D.C. QB Kerry Collins is back, and that’s not a good thing. I like the RBs, but that’s not enough.
Houston 9-7. This team is again the vogue pick to surprise. But they have Matt Schaub at QB. I’ve heard him described as elite, but haven’t seen him come off the injured list long enough to prove it.
Jacksonville 8-8. Say what you want about the running game, it won’t be the same without Fred Taylor. Maurice Jones-Drew isn’t built to carry it 30 times a game. Trouble. Once he goes down, QB David Garrard is left to carry the offense.

Green Bay 11-5. I didn’t like QB Aaron Rodgers coming out of Cal a few years ago, but he had a terrific year last year. Red Zone: 23 TD passes and 0 ints. WOW. The inverse of Brett Favre.
Minnesota 9-7. Once Favre starts throwing INTs, they will fall apart just like Roseanne Barr singing the Star Spangled Banner. And it’ll be just as ugly.
Chicago 9-7. They may sneak to 10-6 but don’t have any receivers.
Detroit 2-14. Why? ‘Cause they can’t go 0-32, can they? Note to the Lions … Don’t break your rookie the first game. Bring him in starting week 4 and play with 7 offensive linemen to protect him.

Philly 10-6. The Eagles did some good things in the draft and retooled their offensive line. My concern is their defense. D-Coordinator died and they lost Safety Brian Dawkins.
Giants 10-6. The defense will be good, but they don’t have a single WR. Don’t give me that bull about the rookie WRs they drafted ‘cause QB Eli Manning’s security blanket was Plaxico Burress and he’s in jail. They lost RB Derrick Ward and RB Brandon Jacobs will get hurt. Ahmad Bradshaw is a good relief back, but can’t carry the load by himself. Eli is overrated and you will see it this year.
Dallas 9-7. This team is more overrated than Forrest Gump. They stay in the news becasue their owner is Al Davis in Training.
Washington 6-10. Ownership without a clue. Paid Albert Haynesworth ridiculous money when he could’ve beem bribed with milk shakes and pork rinds.

New Orleans 10-6 win the division. The Saints can score with the best of them. If they realize defense isn’t just a government department, they will win some games.
Carolina 9-7. QB Jake Delhomme is a bum. They will sink with him.
Atlanta 8-8. I keep hearing how EXPLOSIVE the Falcons will be on offense. Not seeing that one. The league has plenty of tape now on QB Matt Ryan and it will be used……like the Cards used it in the playoffs last year.
Tampa 4-12. Unless new TE Kellen Winslow hops on a motorcycle, and then they’ll finish 3-13.

The single worst division in football.
San Francisco 10-6. If their defense is decent, they can run the ball. As for holdout WR Michael Crabtree, I would tell him “we have made our last offer. If you want to sit out, screw you and agent, who also happens to be your cousin Pookie.”
Arizona 7-9. Their QB has a bad hip. Now think about that. Nothing says you are too old like a bad hip.
Seattle 6-10. Seahawk fans have no grasp on reality. I heard people this week saying the Hawks have just as good a passing game as the Cards. Really? The Hawks best WR is equal to Steve Breaston of the Cards. Who? Exactly.
St. Louis 6-10. Ran out of room. Which is what RB Steven Jackson will be saying this year.