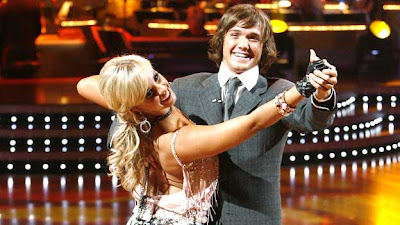 Louie Vito dukes it out with Donny Osmond

I don’t know what you were doing Monday night, but if you missed the premiere of ABC’s “Dancing With The Stars,” you missed a moment in television history. There it was, a professional snowboarder waltzing his way into the hearts of millions of American viewers. A contestant who is also linked to our Mammoth area; Pro Snowboarder Louie Vito.
Louie, like many pros, comes to Mammoth for early-season training to prepare for the upcoming season. I’ve known Louie since he was a kid competing on the USASA amateur circuit. But forget about all that right now. We need to talk dancing. And if one thing is for certain, if Ballroom Dancing ever becomes an Olympic sport, Louie will have the upper hand on any professional snow athlete. Cha cha cha.
As far as the male contestants he’s competing with on the show, Louie is going to have to overcome the decades of popularity of Donny Osmond and the polished moves of Aaron Carter. That said, knowing Louie’s tenacious drive to win, I think he’ll send Donny packing his bags to the wax museum and sneak up behind Aaron, not only stealing his moves, but stealing his girl as well. It wouldn’t be the first time I’d seen Louie with more than one girl on his arm.
Which brings me to Louie’s partner, Chelsie Hightower. Grrrrrrrrrrr. Who let that little leopard out of her cage? I was thinking to myself as I watch the show, “Louie, forget the Waltz. Forget the Foxtrot. Propose dude, propose.” At the end of his performance I was totally stoked on how well he did. And I was also impressed with how well he held himself on camera.
Something else also dawned on me as I was watching the show. Louie will always be an alumni of Season 9 with the other contestants, for Life. And what does that mean? Connections. Big time connections. Let’s take a look at some of the possibilities for Louie in the future.
He’ll never have to worry about pool supplies or replacement water wings thanks to Olympic Gold Medalist swimmer, and new friend, Natalie Coughlin. He’ll be hanging in the Dallas Cowboys VIP suites sipping champagne and scarfing down brats watching the game with buddy and Hall of Famer Michael Irvin. If he ever gets confused and needs some advice on clearing his head, a call to new friend Macy Gray could do the trick, or maybe not.
If he decides to start a business, new big sister Kathy Ireland will be there for business advice and father figure Tom DeLay could provide the connections for raising the dough. (Just don’t ask questions as to where the money came from).
I can also see him chilling out over at the Osborne’s crib sipping a latte with Kelly and getting tattoo advice from Ozzie.
And lastly, UFC champion Chuck Liddell will be his new bodyguard, ready to beat the crap of anybody that takes a swipe at Louie’s size again.
Louie is taller than most men and I’m betting he’s going to kick ass on this show.
Stay tuned for next week’s episode!
FYI … Louie is still alive on “DWTS,” making it through to the next round. He (and Chelsie) avoided the ax that fell on fellow competitors Ashley Hamilton and Macy Gray.