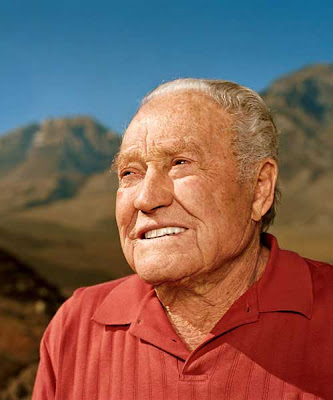 Like a lot of you mountain lovers, Dave McCoy is one of my heroes.
The man that made Mammoth Mountain is right up there with Warren Miller and Hermann Maier, Batman and Robin, Bode Miller and whoever dated Suzy Chapstick.
Sure, in their primes, maybe “the Hermann-ater” and Bodie skied faster, and perhaps Robin and Suzy looked better in Bogner ski suits, but they didn’t have anything on Dave. Just like those heroes, McCoy is made out of nothing but dreams and desire and a determination to see them come true. But unlike the above folks, Dave made his dreams come true here, in the Eastern Sierra, and he obviously wanted to leave something for the rest of us.
Dave McCoy is 94, and he still has the energetic smile and sharp eyes of a hopeful, starry-eyed kid. Exactly the way you’d expect your hero to look as he closes in on a century of living life the way it was intended. And he’s still making a positive difference, just like you expect your heroes to.
A few weeks back, Dave showed up to kick-off the 10th Annual Mammoth Lakes Foundation (MLF) Golf Classic at Sierra Star. He was as friendly, happy and humble as ever. The MLF is celebrating its 20th anniversary this year. Its mission, to cultivate higher education in the Eastern Sierra, is also one of Dave’s dreams. And just like a McCoy on skis or a dirt bike, the dream continues to gain momentum.
Last year, thanks to MLF, the Mammoth Campus of Cerro Coso Community College greeted students with the first community college student-housing complex to open in the state in 20 years. This fall, Mammoth’s college has its largest enrollment ever and some of its graduates are already out there making a positive difference in the world.
Graduates such as Christie Fulcher, who’s now a History Professor at Western Carolina University.
“I just love Dave McCoy. He helped make my dreams come true,” she often says.
Dave Schacht runs Sierra Star, and as usual, he was a total pro handling the tournament. As the event began winding down I asked “Schotty” how his day went. “You know, the tournament went fine, but without a doubt the best part of my day was when I got to talk with Dave McCoy. He’s just such an incredible man. He totally inspires me,” Schotty said.
Outside of a few handshakes and hellos, I’ve only ever really had the honor of one brief conversation with Dave. It was several years ago, and he told me that I was a good writer and that I should keep at it.
Since then, I’ve never dared to try and have a conversation with him again. For when one of your heroes approves of what you sweat, struggle and bleed for, what you put your heart and soul into, just as he did for his passion, you don’t want to push your luck. You want to leave the dream-come-true a dream-come-true.
As he is for many of you, Dave McCoy is one of my heroes. But unlike a lot of you, I never want to talk to him again, except to say, “Thank you.”