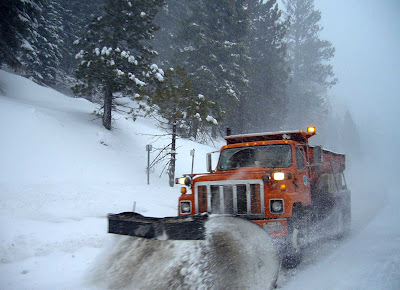 This winter, a photo such as this one possibly won’t be able to be taken on a Friday. (Photo by Ryan E. Pedone/www.hankstruckpictures.com)

It’s the dead of winter … a huge storm is dumping snow countywide. And it’s Friday. For most Caltrans workers, a FURLOUGH Friday. So what are the odds that when it comes to clearing the roads, the state-run system’s crews will answer their phones? If you ask Mono County’s Board of Supervisors, let’s just say they’re not optimistic.
Supervisors recently met with representatives from the California Highway Patrol (and Caltrans), who briefed the Board on the status of state-mandated furlough days this coming winter. A recent Local Transportation Commission meeting revealed that budget cuts in Sacramento have forced the agencies to take state-mandated furlough days the first three Fridays of the month. Which is a major concern to Mono Supervisors Hap Hazard and Bill Reid.
CHP added six new officers to the Bridgeport area with the idea of providing 24/7 service using a staff of 18 officers, covering a patrol region ranging from Tom’s Place north. In terms of field officers, CHP said furlough days would not affect its operations. “We have latitude on furlough days, especially in terms of clerical employees,” said Sgt Biehl. “Conditions can change rapidly, in as little as 10 minutes. Everyone wants real-time information to find out what’s happening now, and we work with Caltrans to try and keep that information up to the minute.”
Hazard asked CHP to consider making better use of a community information transmitter to distribute current information. “People can be sitting in a road closure just outside of Bishop looking at clear skies, not realizing that there could be storm conditions at the Green Church Road,” Hazard said. “If we can get more access to it and make better use of it,” Hazard added, motorists could have more real time information between point of road closure and the locations of the emergency.
Governor Arnold Schwarzenegger has ordered that any CHP overtime incurred must be critical to public safety.
Craig Holste, Caltrans Deputy for Maintenance and Operations, said Caltrans is confident it will be able to meet forthcoming winter road maintenance demands. Employees will, he reported, have the ability to work a furlough day and bank the days off along with vacation time, probably taken during the summer. “Something’s gotta give,” Holste said.
Other issues Caltrans is dealing include employees grousing over overtime limitations and a 15% overall cut in compensation, as well as another 15% cut in equipment inventory, which could force delays in repairs and maintenance of Caltrans road gear.
Reid said he hopes Caltrans has a backup system. “I’m not real optimistic that when the phone rings on a furlough Friday it will be answered,” he said, qualifying that by adding that he’s well aware of the games played by Sacramento.