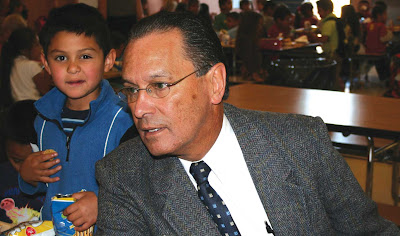 Romero’s potential departure is nothing to joke about. (Photo by Geisel)

So do questions surrounding Superintendent’s “resignation”

Did Superintendent Dr. Frank Romero resign? If so, why? Further, what happened between he and the Mammoth Unified School District Board of Education during a two-hour closed session Monday night that postponed his departure, if that was indeed his intention?
The Sheet heard the rumors a few weeks back that Romero may resign, but even after Monday night’s Board meeting, there are still more questions than answers.
Whatever may have brought him to an impasse with the Board, neither Dr. Romero nor the Board are talking. They were, however, listening during public comment, as an impassioned public asked that, failing all else, both parties work together to keep the district running smoothly.
“Given the current situation, we need continuity, follow through and strong leadership,” said Dan Dawson, who spoke with the full knowledge and support of Rusty and Bonnie Gregory. “We went ahead with the new Independent Study Center because we thought he was the guy who could make it happen.” Dawson reckoned the cost of buying out Romero’s contract and headhunting for a new superintendent could cost the MUSD as much as $400,000, an amount its budget simply can’t afford.
“I honestly believe he’s the best [superintendent] we’ve had in sometime. And we’ve had some lousy ones.” Dawson suggested the Board evaluate Romero in January, then in February renegotiate his contract, which is up in June 2010. “Get through the school year, avoid needless spending and base Dr. Romero’s employment on clear objectives.”
Others weighed in, citing everything from his demonstrable leadership skills to results, such as improved STAR test scores and the district’s “safe harbor” status in Sacramento. One comment called the potential loss “tragic for our schools and our kids.”
A “bump in the road” is what Jeannie Oakeshot, President of the Teachers Association and a teacher herself, called the situation. “Take this energy and focus on saving the schools.”
Not everyone was so touchy-feely. “The only reason we heard about this is that someone broke confidence,” suggested Kathy Cage. “[The Board] didn’t ask for his resignation. Once it’s done, they’re done. Let him resign. Identify the problems and if you can’t get them resolved, do what you have to in good conscious.”
“However it was made known, we need to support Dr. Romero,” said Sherine Sanders, a parent of MUSD students. “Is it that impossible?” pleaded Clare Kellett. “Reach a compromise.”
“When I first heard something might be happening, I thought there must be some miscommunication, some misunderstanding,” said Patricia Holland. Indeed, but what makes up that miscommunication or misunderstanding between Romero and the Board remains a mystery.
A statement issued by MUSD Tuesday morning offered little in the way of clarity. “There was no formal action to report, but we (the Board) have met at length together with the Superintendent to discuss our goals for the District and for the Superintendent for this school year. The rumor that the Superintendent is resigning effective immediately is false,” read the release. “The Board and Superintendent will continue to work together for the remainder of the 2009-10 school year. The Superintendent’s evaluation and subsequent new goals and objectives will commence in January 2010 under the terms of his contract.”