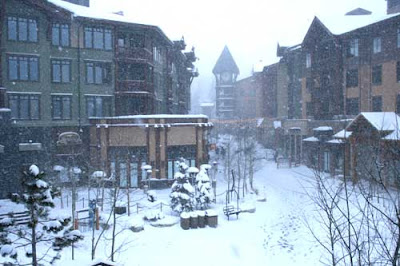 This quaint, tranquil winter scene in the Village at Mammoth is soon to be interrupted by skiers heading to new restaurants, such as Station 9 and the new Gomez’s location among others, as well as the return of Mammoth Gallery to its former digs. (Photo courtesy www.365mammoth.com)

They said it couldn’t be done.
They, in part, being skeptics here at The Sheet.
They said there was no way Matthew Lehman of Trademark Properties could come close to his goal of getting 85% of the Village at Mammoth’s commercial space leased by this winter.
They may very well be proven wrong.
Two commercial leases were signed this week by Michael Ledesma (Gomez’s) and Warren McGill (Mammoth Gallery). Meanwhile, Mammoth Mountain is deep in negotiations to lease three more spots.
Gomez’s will lease the former Hennessey’s location and Mammoth Gallery will return to its old spot. MMSA is looking at the never-occupied Station 9 location, the former McCoy Sports spot and the former Starbucks location.
Gomez’s owner Michael Ledesma, is particularly fired up about the whole thing.
“I’m so excited. We’ve been the in the A-Frame (on Mountain Blvd.) for 16 going on 17 seasons, but in the Village, we think the former Hennessey’s spot is possibly the single best location there, maybe even in Mammoth, especially due to the proximity to the Gondola,” “I guess CNL finally woke up and smelled the coffee. They came up with a lease that made sense,” he added.
Sheet: The Village is a big move for you. What peaked your interest?
Ledesma: “Basically, we maxed out our potential at the A frame,” he replied. “The question became, ‘How do we grow and still maintain our reputation, particularly with locals, as being a great product delivered at a great price?’ We’re budget; you can have dinner and a festive experience for $10-12. You can’t do that too many other places.”
Ledesma said he’d looked around, but couldn’t find anywhere else in town that made sense … that is, until the Village said they were looking for Mexican or Italian solution to Hennessey’s. “I originally entered into a conversation with them primarily as a defensive measure, but once we heard how accommodating things were going to be, we got really interested,” he explained.
Targeted opening date: Thanksgiving or earlier, though Gomez’s will still be in the A-frame until the new location throws open its doors. He said Plan A is to lease the A-frame to another party, but failing that, his Plan B will be to hang on to the spot and turn it into another restaurant-bar concept. “I already have some ideas I can work with. It’s a viable building, comfortable, great location, already known.”
Art will also return to the Village after a lengthy absence. Owner Warren McGill said he plans to open a revamped Mammoth Gallery location on Nov. 21 … in the same space it occupied previously. “We left in June 2008 because the rates were too high, and everything was unknown at that point,” he explained. “Rent credits and rebates were issued at the landlords’ discretion, but as tenants, we never knew what the rates were going to be. Now, CNL’s got the rents current with market rates and more straightforward.”
As to the new, improved Village, “It would be great to have a parking structure, but that’s a long term issue, and the Village is doing a much better job on events,” he added. Already at work on improvements, McGill said the space will sport all new fixtures and a new floor plan. He said the Gallery is planning on opening Nov. 21 — “just in time for our 25th anniversary in Mammoth” — and will also continue operating its other “new” Mammoth location, which opened a year ago on Old Mammoth Rd.
MMSA Senior Vice President Pam Murphy said the lease for the Station 9 space is close to 100% certain. The tentative concept is for a bar/restaurant combination with an emphasis on the apres-ski and early evening crowd.
At the other two retail locations, MMSA is concurrently working on lease arrangements and licensing agreements (i.e. MMSA will immediately sublease the spaces to a third party. At the old Starbucks location, MMSA is in negotiations with … Starbucks to become the licensee.
Though Murphy would not divulge who MMSA’s partner might be at the old McCoy Sports site, Quiksilver is rumored as a candidate.