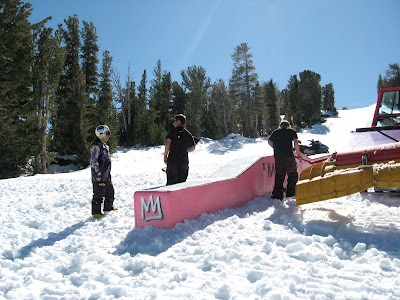 For the 2009-10 season, MMSA’s Oren Tanzer, Director of Youth Action Sports Marketing, is not only excited about the new snow, but also about the new features that Mammoth Unbound is showcasing. “We’ve got a lot of new, innovative stuff that I’m sure people will want to know about,” said Tanzer. So without further adieu …

Refurbished Boxes: This year the Unbound crew resurfaced the plastic sheets on the c-boxes and replaced them with 1.5” plastic. “it’s something most people won’t notice, but they’ll be happy that boxes can stay on the hill longer,” claimed Tanzer. Spruced up boxes mean less pulled-up pieces of plastic and less broken pieces of face.

Somewhere Over the Rainbow Collection: This compilation of baby, medium and daddy-sized double rainbow rails will surely satisfy every skill level. The baby-sized rainbow rail is merely 6 ft. long and will be found in places like Disco Park. The medium rail is 15 ft. long and the daddy rail is a massive 30 ft. long by 7 ft. tall beast. Also in this collection is a 30 ft. long rainbow box that stands 7 ft. tall and 18”wide. One of the unique elements of this box is a removable donkey.

Aircraft Carrier Box: This new box is a flat-up-flat-down-flat technological masterpiece. Head to toe it is 30 ft. long and 25” wide. This feature can be found in Forest Trail this weekend.

Tara Dakides’s Mailbox: Made for Tara Dakides by the Unbound crew long ago, this renovated 20 ft. long mailbox jib has been pulled from her backyard and is currently placed at the top of Forest Trail. A great feature for the novice jibber.

Plastic Tranny Wall Rides: One of the more exciting features Unbound is pulling out this year are two mobile plastic tranny wall rides. Each stands 6 ft. tall and 12 ft. wide. What’s appealing about these ramps is that they can be set at an angle and used as a launch ramp or set upright for vert. In addition, the two ramps can be set up back-to-back to create a spine feature. “These ramps are pretty unique and you can set these up in just about any configuration,” says Tanzer. Look for the plastic wall rides later in the season.