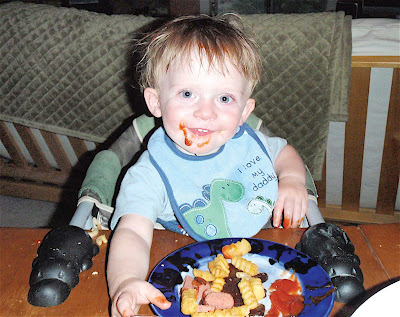 Something else your father never warned you about

In a world full of things like manziers and bros, pills that cause four-hour erections and where even a butt-ugly guy like David Letterman can have a sex scandal, you’d think that a man could carry around a bag. But it appears that a “man-bag” is something that simply defies the natural order of things.
Sure, men occasionally carry bags—grocery bags, hockey bags, garbage bags, bags full of fish or beer, gym bags, golf bags, camera bags, bags of Mary Jane, baggy eyes when we’re hung over—but we don’t normally carry a bag with us everywhere we go. Bags are not part of our daily routine. Nor are they an accessory that becomes a useful symbol of our individuality and style the way purses or pocketbooks often are for women.
Unfortunately, this is something most men don’t discover until they actually breed. Our fathers never tell us this kind of stuff. Instead, they wait until it happens to us and then laugh in our sleep-deprived faces. Actually, the best guide any guy is ever going to find about being a father came from Michael Keaton when he played Mr. Mom. Sample dialogue:
“Can I give you a hand?
“You can give me two. I don’t know what the hell I’m doing.”
Men simply do not naturally carry bags as part of our existence, especially bags full of rash ointment, sippy cups and extra socks; even if the bags do reward the carrier by containing randomly floating piles of snacks like Cheerios and Goldfish. Yes, they’re a tasty bonus (not as nice as say, Beer Nuts or beef jerky), but they’re still not strong enough incentive to change our testosterone-driven ways.
When we, the hairier and more flatulent members of the species, do carry bags around with us, it’s out of absolute necessity and then we give the bags cool names. Names like satchels or creels, messengers or duffels, brief or attaché cases, back or fanny packs. Well, maybe “fanny pack” isn’t cool, but it does contain the word “fanny” so it certainly has its manly merits.
But the bottom line is that men, unlike women, aren’t made to carry bags with us as we stumble through life. Just like giving birth, driving while putting on make-up and remembering to always put the toilet seat down, bags are just part of the woman’s domain. And most men don’t mind. Heck, we don’t even notice until we reproduce, and then we realize we’re (the ones who got) screwed.
Men are never trained to carry more than a wallet and a handful of useful excuses like, “Billy made me do it,” or “It seemed like a good idea at the time.” We’re not taught to carry around anything, let alone a bag with our (or a loved ones’) necessities in it. But all that changes once a baby arrives. From then on, it’s a crash course in bag management—and it turns out most of us dads resemble crash test dummies.
That’s why you don’t often see fathers holding a child in one hand and a baby bag in the other. Once we get our hands filled with a kid we usually can’t remember that a kid comes with accoutrements. Lots of ‘em. So many accoutrements, in fact, that half the time the average dad feels like he’s not simply a father but rather a roadie for the Allman Brothers Band. And on the rare occasion we actually do remember to bring the bag full of kid’s stuff, Mom has more than likely pillaged it
Typical Daycare Provider: Excuse me, Dad. Ah, you got the kid here and he appears to have most of his clothes on and you even have the bag. But where’s the food and stuff to drink, the extra clothes and diapers? There’s nothing in this bag except crusty Cheese Doodles, dirty socks and what looks like fishing line. And by the way, what did you comb his hair with, a pillow?
Moments like this, naturally, lead to some manly-melt downs, like the typical one a local dad (who shall remain name-less for the sake of his love-life/prostate health) recently lamented to me over a six-pack.
“I just want my own (expletive deleted) bag! With the stuff I (slang term for love-making) need in it. She has her own (Lord’s name taken in vain) bag for the kids, but she can’t keep her (something you might hear in prison) hands off of mine. I just want my own (one of the seven words you can’t say on TV) kids’ bag, for crying out loud! Is having my own man-bag really asking too (rhymes with ‘Turduken’) much?!!”
Perhaps the real problem with men and bags is a simple one: most of them, especially baby bags, don’t come with beer holders. Maybe the solution is to make bags for dads, man-bags that come with holders for beer, Duct tape and processed meat products. Or maybe it’s just that being forced to carry a bag has finally knocked at least one local dad off the deep-end.
As Mr. Mom said, “My brain is like oatmeal. I yelled at Kenny today for coloring outside the lines! Megan and I are starting to watch the same TV shows, and I’m liking them! I’m losing it!”