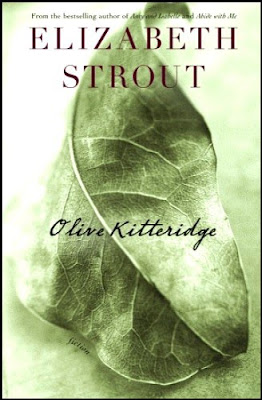 At the beginning of the summer, the elderly owner of an independent bookstore in Washington handed me a book from her display table and said, “Read it. You’ll love it.”
I looked at this old woman standing before me and wondered why she was so sure of herself. I didn’t know her. Sure, she seemed well-read—she was the owner of a bookstore, after all. But how could she pass such a judgment, recommending a book to someone she had only just met?
I glanced down at the book’s cover—Olive Kitteridge, by Elizabeth Strout— and noticed the seal, “Winner of the Pulitzer Prize” in the top right corner. I guessed the novel must have won the prize for something. I decided to buy the book.
After finishing Olive Kitteridge, I now understand the woman’s confidence. She could recommend it to any customer in her bookstore and, chances are, they would love it too. It’s the kind of novel you can’t put down, one that you feel a part of, with a story that sticks with you for months, perhaps years, after reading the final page.
Elizabeth Strout’s novel is essentially a book of short stories, and the thread sewing them together is the character, Olive Kitteridge. The story weaves through the lives of those residing in a small town on the coast of Maine. As the characters’ narratives unfold, truths about the human condition come to light, revealing a complete portrait of a complicated woman.
Olive is the neighbor you never want to live next to, the friend who may just be more of an unfortunate acquaintance, the wife who never appreciates you and the mother who makes your life a living hell. She is a retired school teacher and a force to be reckoned with—overweight and spitfire, with a prickly personality that leaves a sour aftertaste.
As one elderly woman in the town says, “Olive had a way about her that was absolutely without apology.”
As a reader, you dislike her, and yet find her life absorbing. The complexities in her personality are frustrating, appalling, endearing, captivating, and always so… real. She is a reflection of ourselves in moments when life seems unfair, bewildering, beautiful, and forgiving.
Yet, the novel is not just about Olive. With each chapter, new characters are introduced, spanning all ages and dispositions. One story features a talented, dreadfully shy pianist who is aggressively confronted by an old lover. Another paints a touching picture of an elderly couple facing their final years together. One man returns to the town to contemplate his mother’s suicide and his own lonely place in the world.
Many of the book’s messages seem to say: “Life is hard, wear a helmet.” But in their darkest moments, the characters often exhibit an admirable amount of courage and compassion.
“The characters live lives of quiet, and not so quiet, desperation,” said Walt Hoffman, at a Spellbinder’s Book Club meeting for the novel in Bishop.
In one chapter, Olive encounters an anorexic young woman and begins to cry.
“I don’t know who you are,” Olive confesses, “but young lady, you’re breaking my heart … I’m starving, too. Why do you think I eat every doughnut in sight?”
“You’re not starving,” the girl replies, looking at this large woman, with her thick wrists and hands.
“Sure I am,” Olive says. “We all are.”
The novel’s characters are not immune to loneliness and regret. At times they seem vulnerable and weak, but certain experiences bring them empowerment and clarity. Life can be a dark struggle, yet, like in real life, they persist.
“They were so human, all the characters,” said Joan Popp, a member of the Spellbinder book club. “These people were just so amazingly real to me.”
The five attendees of the book club, me included, all fell in love with the book. Although our ages differed by decades, the novel had reminded each of us of important life lessons we often forget.
“A lot of people don’t really live in the moment,” said Lynne Almeida, co-owner of Spellbinder Books. “They don’t realize what they have until it’s gone.”
The novel is a testament to the dynamic aspect of all relationships—the growth, pain, and love that come with human connections. Olive Kitteridge leads us into the complex lives of people dealing with both the harsh and tender realities of the world.
Yes, Olive Kitteridge won the Pulitzer Prize for a reason, perhaps several. It reminds us what it means to be human and to value the gifts life gives us. It’s the kind of book that makes you slow down for the last ten pages because you don’t want the story to end.
“This was such a meticulously and carefully crafted book,” said Kathy Morey, a book club member. “The style of writing made you slow down to match the pace of the town. It was just marvelous!”