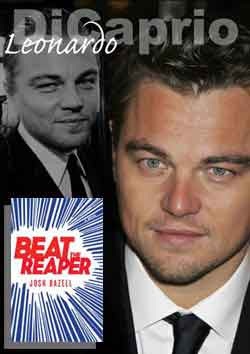 Leonardo DiCaprio has been tapped to play Dr. Brown in the big screen adaptation of “Beat The Reaper.” Lunch’s review follows. (Image: www.filmofilia.com)

Mob kills grandparents of 14-year old boy. Boy ultimately joins mob to find out who killed his grandparents in order to exact revenge.
This is the premise of Josh Bazell’s entertaining, funny and, well, implausible debut novel.
But why let a little implausibility get in the way of a good time?
The story opens with Dr. Peter Brown walking to work at the fictitious Manhattan Catholic Hospital, where we learn all sorts of things we would rather not know about how a modern, inner city hospital functions.
The hospital scenes are some of the best and most outrageous scenes in the book, which Bazell, who received his M.D. from Columbia University, wrote while completing a hospital internship.
The footnotes contain all sorts of fascinating medical minutiae.
Brown, we learn, went to medical school after enrolling himself in a federal witness protection program to escape the mob.
Which = major implausibility #1 seeing as Brown was essentially “relocated” to the same place he was from, but … let’s move on.
Life becomes complicated for Brown when a former mob colleague becomes his patient. Which, of course, wouldn’t have happened if he’d been reloacted to someplace like Phoenix, but then, we wouldn’t have a story. Or at least, not this story.
The narrative runs on two tracks. On one track, Brown recounts his past leading up to the present, and on the other track, Brown’s at the hospital treating patients, particularly his former mob colleague, who’s put out a “hit” on Brown if he doesn’t live through surgery.
A quick, fun read, and as one of the jacket blurbs says, “It would require the sensibilities of the Coen Brothers to make a movie version of this darkly funny, fast-moving novel.”
Hollywood has already snapped up the screen rights to the book, with New Regency Films signing Leonardo DiCaprio to play Dr. Brown in the movie. Pick up a copy of the book at The Booky Joint in Mammoth Lakes and Spellbinder Books in Bishop.

Where The Wild Things Are

“Where the Wild Things Are” has been marketed more to hipsters and 20-somethings than little kids and inherited some controversy because of it.
“The studio originally thought I was making a children’s film,” said director Spike Jonze, “and I thought I was making a film about childhood.” This is an important distinction. I’m not sure if the movie is necessarily for kids. But Jonze, who originally cut his teeth with commercials, skate movies and music videos, does an astonishing job at getting to the root of what it is to be a child again.
The main character Max (Max Records) is the epitome of every youth. Max’s savage world of monsters is straight from the mind of a wild kid even down to the dialogue and personality of the monsters themselves. Like any child, the big hairy beasts fear rejection, loneliness and strangers. They see Max as a parental figure that gives them direction and purpose.
Record’s onscreen performance is surprisingly strong. And as co-lead, the voice acting from James Gandolfini is superb in the furry role of Carol. His rough New Jersey accent is washed, and what surfaces is a soft-spoken adolescent monster.
Overall the film is visually stunning, and Jonze’s vision of a childhood escape is near perfect.Jonze’s decision to use very little CGI paid off and those big Snuffleupagus-looking costumes actually create a sensation of realism and fear.
As dark and ominous as the film sounds it actually comes across as fun and playful, thanks to an outstanding soundtrack by singer Karen O of the Yeah Yeah Yeahs, who wrote and produced the pic’s indie-rock soundtrack.
If anything, the film’s only major weakness is that it is arguably a little thin on plot, which might stem from the fact that the Sendak’s original book is only 10 sentences long.
Like the book, the film doesn’t answer all of your questions. Jonze and screenwriter Dave Eggers give the viewers only a taste of the world that Max has created. Perhaps this was done on purpose, but in any case, it makes everything seem a little more frightening, a little more “wild.”
“Where The Wild Things Are” is playing for a second week at the Minaret Cinemas.