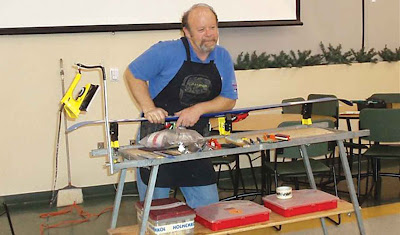 Leonard finds a new mentor in acclaimed ski and board wizard; you can too this weekend

Willi Wiltz is a character, a man who has completely embraced and enjoyed every step of his 30-plus years of professional ski tuning. Willi is race ski tuning. He knows the difference from one stone grinder to the next. If you’d like to meet him this weekend, Mammoth Ski and Snowboard Education Foundation is proud to host the “Willi Wiltz Tune Clinic” at Mammoth High School this Saturday, Oct. 24, from 3:30-7 p.m. He will be demonstrating tuning techniques that have earned Olympic gold and World Cup podiums. All MSSEF members are guests to the clinic, and non-members are $5 at the door.
Willi’s adventures in tuning began when he was a Far West racer skiing out of Northstar. At the ripe age of eleven, Willi needed to know how to fix skis. Growing up with two older brothers on the Northstar team, Wiltz got his “latest” pairs of skis when his brothers outgrew them. As for the conditions they came in, “Well, they had edges.” So, the youngster set out to work on every hand-me-down that ever came his way in the Wiltz household. While 99% of all younger brothers would complain, Willi set off to create a story of unmatched success. Only problem was, he was so good at rebuilding the skis that he could not keep up with them on the snow. He was so brilliant at tuning, the racer-turned-tuner couldn’t hold on when skiing, and he’d DNF more than he would’ve liked to. As he became more competent with ski tuning during his adolescence, he was eventually taken under the wing of Blake Lewis in 1985 to join the Atomic World Cup team. Willi reminisced a bit of the good old days of the mid-80s when there was more money in ski racing. Big companies spent well to see their top competitors win huge events. Willi became a unique and essential asset.
Tommy Moe is one of those athletes Willi worked with a lot over the years. Willi was the tuner-on-scene at the ’94 Olympics in Norway when Tommy took home gold and silver. The two have become good buds over the years, and as you’d expect they “didn’t get into too much trouble” living the life of ski racing. I failed to ask for details of the times they did find trouble, as we all know what potential exists in a ski town. When asked Willi’s favorite part of going on tour with an athlete, he unsurprisingly answered, “Victory.” Ladies, he tunes ‘em to perform hard and fast. The next time I’m sharpening away with coach Jimmy, I’ll ask myself, “What would Willi do?”
Tommy’s not the only one to take it all on tour with Willi grinding, filing, and waxing away. Darren Rahlves’s first-place finish at Europe’s downhill event, thee European downhill event, in Kitzenhel, Austria, in 2004 goes down in the books as a spectacular accomplishment. It’s a challenging course. Of 120 competitors, “30 are there to win, and the other 90, just to survive.”
While Willi’s center of focus exists for alpine skiing, the way he sees it, it’s only right that the art of ski tuning has found its way into the snowboard world. “Snowboarding saved alpine for a while, and it will save it again by bringing more skiers days back into the industry.” His understanding of the winter sports industry is a result of all of his invested years in it.
The X-events are finding themselves into the alpine world, and Willi thinks the up-and-coming athlete from the US is Mammoth’s own homegrown Johnny Teller. Given the caliber of athletes who have finished first under Willi’s watch, it’s safe to say that Johnny’s potential is finally being completely unlocked. Johnny, you’ve got the faith of the best ski tuner this country has ever produced. Another big name: Bode Miller hitting up the X-cross events in a couple years? “Likely.”
According to Wiltz, the entire skiing world is “night and day” when comparing the days of straight skis to modern shaped sticks. It has changed the sport enough that the rules to ski racing have been adjusted, protection nets are higher, speed is more controlled, and the boost in racing has been brought to “an incredible level.”
“There is no guessing once the race happens,” he said. “Snow conditions, ability level, moisture have all been already calculated and scientifically tested over and over again, so when the race happens, there is no guessing.”
Of course, if you have a core shot or your edges are a bit dull, it wouldn’t hurt you to hear Wiltz’s good advice of how to fix it this Saturday.
Find out more of Willi Wiltz at www.sugarbowl.com/podium-productions. Join MSSEF and Willi Saturday afternoon at the high school.
More info on upcoming events can be found at www.mssef.org.