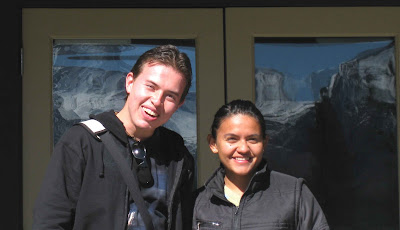 Andres Seguro and Natalia Tique from Columbia are immersing themselves in the MES Dual Immersion program. The Sheet considers their assistance an excellent “exchange” rate! (Photo courtesy Lara Walker)

This year, Mammoth Elementary School (MES) will host 3 interns from Spanish speaking countries to serve as language models and assistants in our classrooms. The 2 interns that are currently here are Natalia Tique and Andres Cuadros Seguro, both on loan from Columbia. Paula Velasco will arrive for the second semester from Buenos Aires, Argentina and Andres will be returning home shortly thereafter.
Readers may be aware that MES has a Dual Immersion program, in which parents can elect to place their children. Starting in Kindergarten, the children are given their instruction half of the time in English and half of the time in Spanish. We have just begun our fifth year of this incredibly successful program, and count ourselves lucky to have our children not only learning, but being educated and literate in 2 languages.
The benefit to our native English speakers is obvious: the acquisition of another language and the brain development that goes along with it. Not to mention the social benefits. Native Spanish speakers also benefit by not simply learning another language, as they will be doing that at school regardless of what program they are in, but they will become literate in both English and Spanish. Studies show that native Spanish speakers in dual immersion programs rather than full English immersion programs do significantly better on tests, are much more likely to graduate from high school as well as go on to college and have a more positive all around school experience.
We as parents saw that the school was having difficulty filling the Spanish-speaking component of the DI program as the program moved into higher grades and subsequently needed more Spanish speaking teachers.
We were not able to hire additional teachers and, as you are probably aware with the school district and state budget issues, the school’s hands were tied, so to speak, in the matter of new hires.
Mammoth Unified School District Superintendent Dr. Frank Romero did an amazing job of number crunching in order to avoid laying off any teachers. Much of this was handled by natural attrition: teachers leaving and not being replaced. Dr. Romero saved the district a huge amount of money by taking on, in addition to his work as Superintendent, the duties of his former position as MES principal — and without the salary!
So, we tried to get creative in helping the staff without adding any financial burden.
While researching, I found an organization called the Amity Institute. Their intern program basically consists of having 20- to 30-year old professionals volunteer their time in schools and live with families in the United States. These interns come from all over the world but for our purposes, we asked for interns from Spanish speaking countries. They work in our classrooms for up to 25 hours a week, and also take personal study classes at Cerro Coso Community College.
Natalia is assisting Marci Jefferson in the fifth grade dual immersion class. She is providing all of the Spanish instruction under the supervision of Marci to all 36 dual immersion students in fifth grade. She also assists in the third- and first-grade classrooms.
Andres is working in Emily Underkofflers’ classroom. This year, in order to address the needs of all 60 dual immersion children in second grade, Emily teaches all day in Spanish to 30 kids for half of the time, and then the other 30 the other half of the time.
Andres has been her assistant, working with smaller groups of kids so that all of the kids can receive more individualized attention. He also assists in the Kindergarten classroom.
Natalia and Andres delivered a presentation to noon Rotary on Oct. 22 to thank them for their assistance. The noon Rotary came to the rescue back in March when they basically paid for their stipends by their generous donations and we are so grateful to them!
The sunrise Rotary has also contributed and we would like to officially thank them as well. The two will also make a presentation at sunrise Rotary on Oct. 28.
A very important part of this program to fulfill has been the host families. We are so honored and thankful to have two amazing families open their homes and take in these interns. Andrew and Gilann Bourne and their sons, Rand and Finley, have welcomed Andres into their home. Russ and Keely Ferguson, with their daughter Lily, have likewise welcomed Natalia into their home. This program simply would not be possible without the generosity of these two families and our community.
Right now, we are seeking to raise funds and secure host families so that we may continue this program next year. If you are interested in making a monetary donation, a check can be sent to MUSD c/o Mammoth Schools NOW Foundation, P.O. Box 3509, with a notation that you would like the contribution to go towards the Amity Intern Program.
If you are interested in hosting Paula Velasco from Buenos Aires for all or any part of the second school semester, January through mid-June 2010, or another intern for any part of next year, contact me. Any additional questions can also be directed to me at 760.934.9916, or e-mail rubyandlara@yahoo.com.
Read more about the Amity Institute online at http://amity.org.