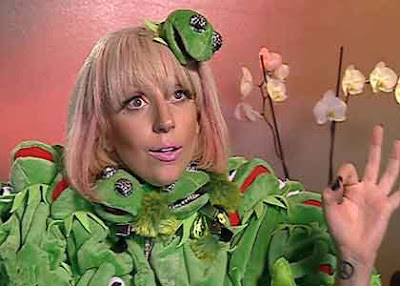 Never mind Kevin Green, The Sheet thinks Lady Gaga should do some time for wearing a costume made out of Kermit the Frog dolls. Talk about not easy being green! (Photo: barfblog.com)

It’s been 3 years since Los Angeles developer Kevin Green came to Mammoth Lakes and immediately set about buying up restaurants and businesses. The entrepreneur paid top dollar for some of Mammoth’s signature properties at the time, names such as Grumpy’s, Gomez’s, Bergers (as it was known then) and Slocums.
When the real estate market plunged soon afterward, so did Green’s plans. Blindsided by the downturn, escrows got delayed, promises were made, but not kept, and worst of all, checks were bouncing and money was being improperly wired to and fro. In some cases, money was to be wired, but never arrived.
Green ultimately faced felony charges and even spent 26 days in the Mono County jail until finally being able to post bail.
On Monday, Green was sentenced in Mono Superior Court in Mammoth. Presiding Judge Ed Forstenzer could have really thrown the book at him, but contrary to how Green’s luck has gone in recent years, this time Forstenzer cut Green a break.
At one point Green was staring at felony counts of writing checks with insufficient funds with intent to defraud. Near the end of August 2008, Green’s parents helped him pay a sizable amount of what he owed.
Since then, Green has apparently managed to successfully clear all of his debt to area businesses. That item, along with no prior record, were key factors in the judge’s decision.
Green, standing next to his attorney, Gerald Mohun, pleaded “no contest” to a felony charge of writing checks with insufficient funds with intent to defraud. All other charges were dismissed.
Mohun asked the court to reduce the felony to misdemeanor, citing his resititution payments, as well as numerous letters of support.
The District Attorney’s office said it was opposed to the reduction, but Judge Forstenzer decided otherwise, with a few words of caution for the defendant.
Saying he found Green’s business conduct “egregious,” he also said the testimonial letters did little to sway him. “Restitution to the victims impressed me more than anything else, as well as absence of a prior record,” Forstenzer said when passing sentence.
Reduction from felony to misdemeanor was granted. Green was given a three-year suspended sentence, with credit for the 26 days of time already served. He was also fined $400, in addition to $100 for the Victims Restitution Fund and $25 in booking fees. Forstenzer did, however, admonish Green to “obey all laws,” and added he didn’t want to see any further violations.
In the hallway immediately after sentencing, Green said he was relieved. “I’m really glad that’s all over.” A payment plan was made available to him, but Green declined the offer, saying he plans to pay all fines and fees immediately.
“I think Judge Forstenzer made the right decision,” commented Mohun afterward. “Reducing it to a misdemeanor was appropriate, considering the fact that Mr. Green made restitution and had substantial support from friends and members of the community. I’ve spent a considerable amount of time with him. He’s a decent guy who went through a rough patch, but I think he’s well on his way back.”
Mohun added it was too early to say what Green’s next move or opportunity would be, but friends who turned out to support him in court on Monday all agreed they hoped he would return to Mammoth’s business stage, adding they thought he had “much to contribute to the community.”