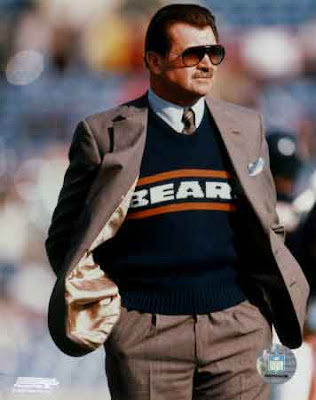 The Sheet has obtained a secret transcript of the first public bear subcommittee meeting after sending Wolf forward in time in its DeLorean (which it bartered for at the dump during the Cash for Clunkers program). The date: Monday, December 28.

Harvey: Now before we start, I’d like to register a protest. I don’t care what Peter Tracy says, this meeting should not be a public meeting. I personally had the Town Manager get a second opinion on the matter from a man who should know something about bears: former Chicago Bear Head Coach Mike Ditka. And Ditka told us that he considered “meetings” to be like “huddles.” And his Bears never had open huddles.
Schienle: Da Bears!
Sugimura: I don’t know who this Mike Ditka person is, but he sounds like a very wise man.
Parrino: Just out of curiosity, how did you get in contact with Mr. Ditka?
Clark: Through the Acme Motivational Speakers Bureau – Retired NFL Coaches section.
Parrino: Did it cost the Town anything?
Clark: Well, yes. Mr. Ditka’s normal speaking fee is $25,000, but he’ll offer pithy advice and exhortations over the phone for just $5,000 … and he threw in the outgoing message on the Town’s answering machine at no extra charge.
Grossblatt: It’s a really cool message. It goes, “Hi, this is Iron Mike Ditka, and you have reached the Town of Mammoth Lakes. If you’re looking for a draft pick, since we have a whole bunch of extra staff in the community development department, contact Mark Wardlaw at extension 238. If you’re looking to create some salary cap space, contact Brad Koehn at extension 240, although, let’s face it, there is no salary cap when it comes to taxeating in Mammoth. If you’re looking to implement the wildcat offense (referred to locally as the bobcat defense) during snowstorms, contact Ray Jarvis at extension 257. And if you’re looking to sell the Brooklyn Bridge, contact Rob Clark at extension 226.”
O’Connor: Excuse me, Mr. Chairman …
Harvey: There will be no public comment until the end of the meeting. Please sign up on the sheet provided at the back of the room.
O’Connor: That’s what I wanted to talk to you about. There are, like, 65 names already on it.
Harvey (smugly): I guess you’ll just have to be #66.
Committee chuckles.
O’Connor: But I don’t recognize a lot of these names. Well, I do, but, how can there be 65 people who want to comment if I’m the only member of the public who’s here?
Sugimura: I don’t want to understand what you’re getting at, but if you have a point, bear subcommittee meeting rules dictate that public comment be limited to 14 seconds and you’ve already used 12.
O’Connor: Okay, first on the list, Winnie The Pooh. Second on list, Smoky the Bear. Third on list: Care Bears …
Tracy: Point of order. How many Care Bears are there?
O’Connor: 4th on list, Fozzy Bear. 31st on list, the bear from Grizzly Adams. 46th on list, the Berenstain Bears …
Tracy: Again, point of order. Is that Papa Bear, Mother Bear …
Schienle: All this talk is making me hungry. Can you pass the gummy bears?
Parrino: See, that just illustrates this committee’s attitude towards wildlife. Kill, then eat.
Schienle: Who doesn’t like meat? After all, we elected a Councilmember in this town named Bacon.
Harvey: Okay, enough is enough. Let’s get right to the agenda. First item: Who would win in a fight, Ditka or a hurricane?
Clark: Ditka.
Harvey: Ditka.
Sugimura: I don’t even know who this Ditka person is, but if the Police Chief says Ditka, well, when have I ever disagreed with Town Staff on anything? Ditka!
Parrino: But what if the hurricane is named … HURRICANE DITKA.
Schienle (pounds his chest and coughs): Pardon me, just choked on my gummy bear.
Chaos breaks out on the dais, until …
Harvey: Order, order … Wendy, did you have something?
Sugimura: Yes, in light of Joe’s “observation,” I think this requires more study. I move to table the whole Ditka vs. Hurricane topic until the first regular meeting in (consults her filofax) May 2010.
O’Connor: What?! I suppose the next thing we’re going to table is the discussion about the Simpsons episode where Springfield spends all its tax money on bear patrols.
Harvey: That’s a good idea. Actually, I’d be supportive of moving that one up on the agenda.
Clark: Where is Steve Searles? Anybody seen Steve?
Schienle: You know, I just tried to call him and I’m a little concerned. There was a woman’s voice on the other end.
Grossblatt: What’d she sound like?
Schienle: Kinda sexy, actually.
O’Connor: Wait a minute. What number did you call?
Schienle: 937.B-A-R-E.
Parrino: I know that number! It’s a strip club down in China Lake.
O’Connor: Joe!
Searles walks into the meeting.
Searles: Sorry I’m late. I just had an interview with National Geographic. They want to do a bear story.
Sugimura: This just pisses me off. You didn’t go to college and I went to an Ivy League college and you get National Geographic and I can’t even get a full-time job with Mono County. That’s it. I’m not renewing your contract.
Harvey: Contract? That’s a potential closed-session item. Let’s go into closed session.
Tracy: Point of order. There is no closed session on your agenda.
Harvey: Can we post an emergency agenda item?
Tracy: Maybe. Depends who’s got the gummy bears.
Schienle: Da Bears!
Grossblatt: Hey, I just received a call from a guy down in San Bernardino – who hasn’t been charged with any crime involving shooting bears by the way – who says he’d like to serve on our local bear committee as an advocate for Mammoth visitors.
Sugimura: Visitors? TOT? Sales tax?
Schienle: Hike.
Grossblatt: He even says he’ll back up Randy if things get out of hand during the meetings.
Harvey: Great. A team player. Well, time to adjourn. Monday Night Football’s about to start. Vikings versus …
All: DA BEARS!