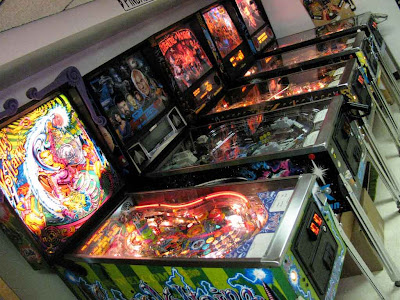 Just some of the pinball machines in Rick Schieve’s basement, Elburn, IL. Unlike Mammoth’s ice rink, his pinball machines have tops to them (well, glass ones anyway). On the other hand, if Stroud has her way, the rink will have a roof in a couple of years or so. At upwards of $1 million, a roof on the rink is, after all, a LITTLE more expensive than a pinball machine. (Photo: orbaddict/flickr)

But tilts when it comes to extension of construction deadline

Tourism and Recreation Director Danna Stroud has been zinging around like a pinball lately, careening off bumpers from one meeting to the next in order to get all parties signed off on a deal which would allow the Town’s ice rink to open this December.
During the past few weeks, she’s appeared before the Mono County Office of Education and Mammoth Lakes Town Council. Both said they’d sign off on their part of the deal to facilitate rink operations for 2009-2010 – but not until the Mammoth Unified School District (MUSD) Board of Education accepted an amendment to the Joint Use and Lease Agreement for the property underneath the rink, which is owned by the MUSD, but currently leased to the Town in a 20-year agreement.
In particular, the amendment extends the length of time the Town has to finish construction, including putting a roof on the rink.
Stroud went before Mammoth Unified’s Board Monday night to secure what she hoped would be a two-year extension. At the outset, it looked like a slam dunk. Board member Jack Farrell moved for a two-year extension, but before the vote, discussion caused the motion to fizzle and it was back to square one; one year, that is.
In presenting her case, Stroud outlined many new additions to the rink this year, including permanent buildings (ticket booth & Zamboni garage) in place, new benches and picnic tables, removal of unsightly glycol barrels and even “festive twinkle lights.” That, she said, leaves operational dollars, but no additional funding for construction (a roof).
That, however, only added to the Board’s general gripes about the rink as a facility. Board member Dr. Andrew Bourne said his main concern was aesthetic. “It’s an eyesore,” he said frankly. “The Town’s clearly not meeting its own design guidelines.” Board Chair Gloria Vasquez agreed. “It’s been referred to as an amenity, which is fine, but it’s currently not attractive as an amenity.”
Stroud replied that the Planning Commission has signed off on the rink’s buildings, site plans, lighting and fencing. It was, she agreed, still a construction zone, and acknowledged Bourne’s and Vasquez’s assessment that the final plans arguably call for rink with a roof and permanent fencing, as opposed to the temporary construction fencing currently in place.
As to the time extension, opinions varied. Board member Greg Newbry said he didn’t see why there had to be a time limit included at all. “We’re not in the business of Tourism or Recreation,” Newbry said. “Take one year [to put on the roof] … take five years. I’m not sure the MUSD should be telling the Town … how to handle its construction plans.”
Bourne said he thought that a year-to-year extension gives the Board “more options,” indicating the move might send a nudge to the Town to have the roof moved up on its list of priorities.
Stroud explained that the request for two years would give the Town more time to pursue different funding mechanisms (via the Town’s current work on a 20-year capital improvement plan) and apply for grant money.
All that work, however, takes time. “We’re just not going to find the additional $1 million to $1.5 million in the next 12 months,” Stroud stated.
The Board voted to extend the deadline for just another 12 months, which Stroud said was fine, but meant that another set of procedural hoops would bring her back before the Board same time, next year.
Meanwhile, Stroud can now go back to the other entities involved with a signed extension and win the approvals needed (which are mostly formalities at this point) to get the rink ready for skating.