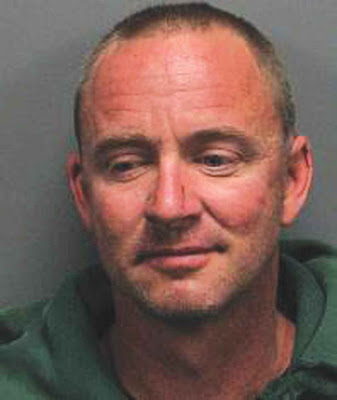 Chris Hamilton, a former Mammoth Lakes contractor better known to locals these days as the “paper bag bandit,” has struck again. And he’s in jail. Again.
Local readers may remember that Hamilton, at the time still listed as a Mammoth Lakes resident, was first jailed on June 27, 2008, for being the paper bag-wearing bandit who robbed a small amount of money from the Minden am-pm mini-market using an “edged” construction tool.
Now living in Reno, he’s currently facing charges he allegedly tried to rob both a restaurant and a convenience store Saturday night, Oct. 24.
According to a report on KOLO-TV 8’s website, Hamilton, 44, was arrested after police say he walked into a convenience store in the 200 block of E. Grove St. with a knife and demanded money at around 9:30 p.m. The attempted robbery was interrupted by a customer. The customer then detained him until police arrived and arrested him.
Police say just 45 minutes earlier, a similar man, also wielding a knife, walked into a restaurant in the 200 block of E. Grove Street and demanded money. The restaurant’s clerk refused him money, and the man took off.
Hamilton is facing two counts of attempted robbery.
No one was hurt, and nothing was taken in these incidents.
However, even though he’s been living in Nevada since last year, his troubles on this end of U.S. 395 aren’t over yet.
Hamilton is also apparently still on the hook for some litigation and insurance issues stemming from work he performed on a Mammoth housing project that reportedly had to be redone and inspected, apparently for the first time.
One former client put the dollar amount involved in just one legal action at well into the tens of thousands of dollars. The former client said Hamilton called recently and asked that charges against him be dropped so he could open a new company in Nevada. “I told him, ‘Sure. You pay me the $67,000 you owe me, and I’ll consider dropping the charges.’”
“It’s too bad, because at one time he did great work, but he went downhill pretty fast,” said another party in the action. (Both names were withheld due to pending litigation.)
Hamilton is reportedly being held on $20,000 bail.
Anyone with additional information is asked to contact Reno Police or Secret Witness at 775.322.4900.