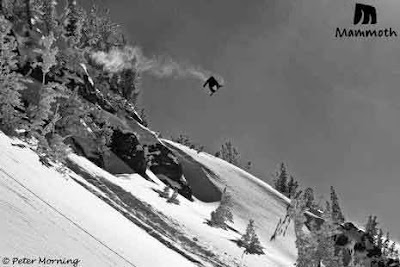 Are you ready for some “Hot Laps?” No, I’m not talking about Santa’s worn-down red thighs or a strip club in Reno. I’m referring to the premier of Mammoth Mountain’s 100% local ski and snowboard film “Hot Laps.”
On Nov. 14, Play Big Productions, Mammoth Mountain’s in-house production company, and Red Bull premier “Hot Laps” at Mammoth’s Big Winter Kickoff Party in the Village. On a national level, the film will be distributed as a free insert in roughly 100,000 copies of Snowboarder Magazine’s Superpark issue, hitting shelves in January.
“It will be the most watched ski and snowboard film this year,” said Oren Tanzer, MMSA’s Director of Youth Action Sports Marketing. Excitement aside, Tanzer is right. Based on sheer distribution numbers alone, it could well be viewed by more people than any other action sports film this year.
The film was shot entirely at Mammoth Mountain and surrounding areas. The overall concept of the film is to show the diverse terrain that Mammoth has to offer along with the phenomenal riders who call Mammoth home.
The majority of the movie is shot without closures, early-ups or special features. However, “Hot Laps” does show a couple of features from last year that were not open to the public, though most of the film is familiar snow. “I wanted to show how good our natural terrain and everyday features are,” said Tanzer.
The familiarity of the movie is appealing to any Mammoth local. Lonnie Kauk’s section is shot predominantly in Main Park while a large portion of Mason Aguirre’s part is filmed on small jibs and 20-foot jumps in South Park. If you are a casual visitor or a diehard park rat, there’s a good chance you’ll probably see yourself in the background in either rider’s sections.
The extensive bonus feature section includes coverage of last year’s Super Park and collegiate Red Bull Snow Wars events, a Peter Morning photography section and a “friends” section with many familiar faces, such as but not limited to Matty Moriarty, Eric Meyers, Nate Farrell, Bobby George and Cornell Agee Jr.
The idea of an exclusive ski area film is not new concept. Last year, Park City released the film “I Ride Park City”( for $24.95) to mixed reviews. The primary focus of the movie was Park City’s terrain parks.
What differentiates “Hot Laps” from “I Ride Park City” is that Mammoth’s film features all local riders, cinematographers and neighboring terrain. “I bought a copy and I knew we could do a better job,” claims Tanzer, “They didn’t have the capabilities to make an all-mountain film, It’s a great park movie but it doesn’t showcase their whole mountain. It looks like it was shot in 3 days whereas ‘Hot Laps’ was shot over a whole season.”
Tanzer, who recently returned to Mammoth on Tuesday from taping an episode of Fuel TV’s “Daily Habits” with local filmer (for you all you film nerds that’s snowboard speak for cinematographer) Greg Weaver and Unbound team riders Eddie Wall, Lonnie Kauk and Alex Dawoud. According to Tanzer, the episode reached a sobering point for Weaver when talk show host Pat Parnell pointed out that because of the film’s large distribution, Weaver is going to be known on a big stage and might be the next “guru” of snowboard filming. The episode airs Nov. 19.
In its entirety, “Hot Laps” is a satisfying film. At a runtime of 34 minutes, it’s a solid series of money shots from beginning to end. The short length of the film actually keeps it engaging, juxtaposed to lengthy Warren Miller type films that eventually leave me more interested in cheese curdling.
I’m not sure I enjoyed “Hot Laps” because I recognized the area and the people in it, or because it actually might be really good. Whether you like it or not it doesn’t matter, a lot of people are going to see it.