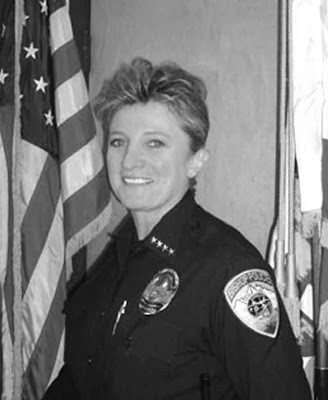 Bishop Police Chief Kathleen Sheehan didn’t grow up with a burning desire to spend a career in law enforcement. In fact, she says, her initial dream was to become a veterinarian.
“But I didn’t have the money for vet school,” she says. “I then saw this ad about becoming a police officer, saw the starting salary, and said, ‘Okay. I’ll be a police officer until I save up enough money for vet school.’”
She fell in love with the job instead.
Sheehan, who spent 25-plus years with the Los Angeles Police Department (LAPD) from 1980-2006, was hired (after an outside recruitment process) as Bishop’s Police Chief in December 2007.
Sheehan’s impressive resumé includes employment by the U.S. State Department overseas for community policing and counter-terrorism efforts, particularly in Indonesia and Pakistan.
So, how did that happen, exactly?
Well, it seems the seminal moment in Sheehan’s law enforcement career came when she was tapped as one of five LAPD officers to attend an Instructor Development Workshop at West Point in 1994.
The workshop took place two years after the infamous L.A. riots and was conducted within the military academy’s department of behavioral science and leadership.
The goal of the workshop was for Sheehan and her colleagues to bring back and implement “community policing” concepts at the LAPD.
In short, says Sheehan, police need to demonstrate that they’re a part of the community they’re sworn to protect and serve, rather than a separate identity that just does its job without any particular emotional investment in the community.
And, as she said, the program “went viral.” It was so successful that the U.S. State Department began hiring her, on a part-time basis, for community policing, evidence-based policing and counter-terrorism assignments in 2004.
Which she performed initially by accruing leave and vacation time from her job at the LAPD.
By 2006, she left the LAPD to work full-time for the State Dept. on these overseas assignments.
As Sheehan said, “I was there [in Pakistan, Indonesia, Israel, et al] to teach local investigators how to make cases based on evidence as opposed to simply coercing comfessions by often brutal means.”
“Community-based policing just gives you better information. Why would someone want to talk to the police if they fear they’ll be beaten or tortured?”
“Anyone can catch a suicide bomber because he’s dead at the scene … it’s harder to find out who employed and equipped him. If you don’t have a way to obtain that information, all you can do is wait for the next bombing.”
Sheehan said the State Department has invested a lot of money in crime lab technology in Pakistan and elsewhere. It was her job to show the locals how to effectively use ballistics tests and DNA evidence.
But it was an extremely demanding job, one that a person can’t perform for an extended period of time.
“Pakistan pretty close to broke me,” admits Sheehan, who described one crime scene she investigated, following an act of terrorism, where there were 1,500 people dead.
“When I was working in L.A., we had 200 homicides a year, and I didn’t think it could get worse than that. Pakistan was a LOT worse!”

Ultimately, Sheehan decided that “I didn’t to spend a significant portion of my life in Kandahar. I can only endure so much tilting at windmills.”
Tilting at windmills? Was Sheehan really making a literary reference to Miguel de Cervantes’s Don Quixote?”
“I’ve read it in English and Spanish,” she replied. (Editor’s note: Damn!)
So why Bishop?
“I needed a hometown,” she deadpanned.

Though Bishop is a far cry from what she’s accustomed to, Sheehan said she was familiar with the area based upon childhood visits and applied for the job precisely because of the beauty of the area and the change of pace it afforded.
“It’s horses, Harleys and homemade pies … and I say the Pledge of Allegiance five times a day [referring to the numerous meetings she attends].”
“I knew Bishop was different when Dana Crom [daughter of the Mayor and a public defender] asked me to join Rotary. That doesn’t happen in the big city.”
Sheet: So did you join?
Sheehan: Of course!

Sheehan acknowledges that she thought there might be a little bit of an “Andy Griffith factor” when she took the job. “I had an image of all rural police departments as being a bit like Mayberry. I found Bishop to be the opposite of that. We’ve got great cops here. My main job, as I see it, is to grow my troops’ connection to the community.”
She is also focused on increased training and having more officers specialized at more tasks in order to keep the community safe BEFORE gangs and narcotics take hold.
Sheehan said she’s pleased that Bishop does have a relatively high number of police officers per capita (13 sworn and 3 reserves) as this allows the department to concentrate on prevention and intervention as well as enforcement.

Sheet: They say law enforcement is taxing on one’s personal life. Have you found that to be true?
Sheehan (laughing): I’ve only had three divorces … but I’m still hoping there’s someone out there for me.
Sheet: Do you perform background checks on potential suitors?
Sheehan: No. I rely on my sixth sense.