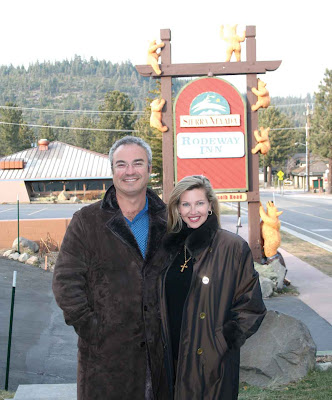 Demetriades bets on himself … and Mammoth

At this time last year, things were looking pretty bleak for Mammoth real estate investor Jim Demetriades. His Clearwater project was stuck in Mammoth planning hell, the U.S. financial markets were in disarray and he was sitting on 6 acres of underutilized property on Old Mammoth Road that wasn’t worth anything near what he paid for it.
As Demetriades saw it, he had two options. He could either take the meek route and declare that the sky was falling and throw up his hands in defeat. Or, he could take a braver route and charge full-speed ahead. He chose the latter. “It fits my Greek ancestry,” he said with a smile.
In short order, he bought out his business partner, found a new project manager, and overhauled the concept (and name) of his proposed development. And then, realizing that a new development is likely years away from fruition, Demetriades took a good, hard look at what he had.
And what he had, he found, was not only salvageable, but desirable.
“I didn’t know if the place could be brought back to life,” he admitted. “But the more I looked at it, the more I thought it could be one of the best of Mammoth’s older properties.”
“So I decided to put some clothing on the bones.”
Which is why Old Mammoth Place (formerly named the Clearwater) has been a beehive of activity during the past six weeks, as Demetriades has employed some 50 people to refurbish half of the hotel’s (soon itself to be renamed Sierra Nevada Lodge) 160 rooms, refurbish the old Rafters restaurant and bar (whose name will be restored) and build an 18-hole miniature golf course.
Which will remain open throughout the ski season.
Which lies under no roof and is open to the elements.
Huh?
I suppose one has to stand on the front deck of the Rafters to fully understand it. As Demetriades, a father of five, envisions it, the kids are out playing the golf course in full view while Mom and Dad get to sit on the deck and knock back a cocktail in relative peace after a day on the slopes. “And we’re going to promote it. We’re going to be handing out flyers at the bottom of the slopes at the end of the day.”
Similarly, Demetriades said he has launched an extensive marketing campaign to tell people about his full-service hotel.
“We’ve got a restaurant, room service, a lobby bar (a beautiful 100-year old bar imported from Long Island), hotel vans, the golf course, sauna, pool table, in-room HD flat panel televisions … and most important, we’ve got the people to make it all work. Talent is key.”
At the restaurant (which will be Italian), Demetriades lured Kerry Mechler from Petra’s to be his head chef. Don Catalano will serve as the G.M.
Bob Hutchinson will manage the miniature golf course.
And if you like the decor and how the rooms have been redone … credit Nancy Demetriades for that.
But ultimately, as Jim Demetraiades said, it’s about the bones. Every project in real estate, he said, makes you appreciate a property’s ambiance, location … and he views his property, much like Mammoth itself, as a diamond in the rough.
“By taking a derelict property and bringing it back to life, I want to demonstrate to Mammoth Lakes that we have good bones.”
Sheet: How will this overhaul affect your prices?
Demetriades: It won’t Our prices haven’t changed. Our rooms still go for anywhere between $80-$200/night … but our occupancy last year was 20%. If we can bring that up to Mammoth’s hotel average of 50%, we’ll be profitable and make our investment back in a year.”